New items of Bitzer at Chillventa 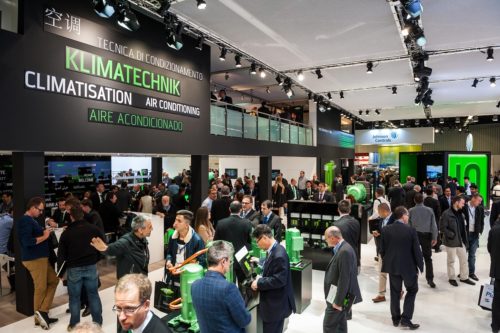 Next generation of compressors for CO2 applications

With the new six-cylinder ECOLINE+ reciprocating compressors for transcritical CO2 applications, BITZER is setting a new benchmark in the use of CO2 as a future-compliant refrigerant at Chillventa 2016. The BITZER ECOLINE+ series boasts three key developments: a new motor technology has been developed for series production to achieve new levels of energy efficiency. Along with the mechanical capacity control, which is also new for transcritical CO2 applications, system efficiency has increased considerably in full and part-load operation. The new operating concept with the IQ modules was developed to take full advantage of the potential of the new technologies in terms of energy efficiency and straightforward integration into refrigeration systems, whilst ensuring simple service. These are also used in conjunction with the ECOLINE+ compressors.

‘We would like to make efficient CO2 technology simpler and easier to understand again, and thus significantly expand the range of applications with the forward-looking refrigerant. The ability to provide refrigeration solutions that are reliable over the long term will require expanding access to CO2 technology’, explains Rainer Große-Kracht, Chief Technology Officer of BITZER. Specifically, further development begins with a line-start permanent-magnet motor (LSPM), which can be operated directly in networks with 50 or 60 Hertz. Incorporating permanent magnets has made it possible to significantly increase motor efficiency in full and part-load operation. This technology has been undergoing testing at BITZER and in selected systems out in the field for more than five years. With Chillventa, the LSPMs will be incorporated into the series production set for CO2 applications. These motors can be operated both directly in the network and in the familiar speed range with frequency inverters. In addition to accommodating operation with frequency inverters, the new ECOLINE+ compressors can also be equipped with the new mechanical capacity control for the first time, enabling compressor operation with a refrigerating capacity between 10 and 100 per cent. The capacity control, which can comprise one controller in two-cylinder compressors and up to three controllers in six-cylinder compressors, is adjusted just as it is with the well-known capacity control of HFC refrigeration compressors. The intelligent operating concept of the CM-RC-01 IQ module, which comes as standard, also ensures optimal efficiency for the oil supply, the oil heater and the new CRII capacity control, which is specially developed for CO2 applications. The interplay between CRII and CM-RC-01 allows the capacity to be adjusted virtually infinitely between 10 and 100 per cent. The CM-RC-01 IQ module makes it very easy and inexpensive to integrate the ECOLINE+ reciprocating compressor into a whole host of system configurations. The IQ module not only improves protective measures and options for monitoring compressors, but also expands their range of applications and thus offers users greater flexibility. This in turn makes it easier, for instance, to compensate for differences between summer and winter operation. The new capacity control has increased overall efficiency, as the CRII enables a more stable and higher suction pressure. Thanks to the intuitive BITZER Electronics Service Tool (BEST) software as well as the monitoring sensors and actuators, which are prewired and preconfigured in the BITZER factory, the compressors are also very easy to configure and service.

Prepared for the future

‘Our issues of focus at Chillventa will be environmentally friendly refrigerants, energy efficiency and user-friendliness – and these coincide perfectly with the strengths of ECOLINE+,’ says Große-Kracht. ‘CO2 is one of the refrigerants of the future – we at BITZER believe that wholeheartedly. That’s because this refrigerant boasts a global warming potential (GWP) of 1, making it virtually climate-neutral.’ As a long-standing company, BITZER has extensive experience with innovative refrigeration technology, and has been promoting innovations in the industry for 80 years. In fact, BITZER has also been developing and manufacturing refrigeration compressors for subcritical and transcritical CO2 applications for more than 20 years. ‘The ECOLINE+ increases system efficiency and reduces the complexity of modern CO2 systems. At the same time, users gain long-term planning security in terms of legal requirements such as the F-gas Regulation and Ecodesign Directive,’ emphasises Große-Kracht at BITZER. ‘Thanks to the ECOLINE+, the refrigeration and air conditioning industry has taken a major step in the right direction in the area of CO2 applications. In short, the ECOLINE+ represents maximum energy efficiency, flexibility, simplicity and convenient operation.’

Each application is unique, which is why BITZER refrigeration compressors, like the capacity controls, are specially tailored for specific requirements. With the CRII capacity control, the intelligent VARIPACK frequency inverters and the VARISPEED compressors, BITZER can offer several options – users can select the appropriate technology for their application. Both mechanical capacity control and capacity control based on speed adjustment have their specific benefits under the prevailing operating conditions. Frequency inverters fundamentally have a soft start characteristic combined with low starting currents when starting the compressor. What’s more, they don’t work in stages and are therefore the optimal solution in terms of control, as the desired evaporation temperature can be selected with the utmost precision. If part-load operation is the primary mode, systems with an electronic frequency inverter are more efficient than mechanical systems due to limited switch cycles. A disadvantage compared to mechanical capacity control: the investment costs for electronic frequency inverters are somewhat higher.

The CRII mechanical capacity control, which BITZER developed from its predecessor, the CR capacity control, is the entry-level model and an inexpensive variant. Now it boasts much fewer control deviations and a much larger range of control. Compared with compressors operated with frequency inverters, the CRII achieves somewhat lower efficiency levels in the lower part-load range and, despite the high switching frequency, poor control quality. However, this is of little importance when it comes to systems with several compressors and large-volume cooling positions. The modulation range for two, four and six-cylinder compressors is between 10 and 100 per cent and, for eight-cylinder compressors, between 50 and 100 per cent. BITZER will be presenting its mechanical capacity control, including for transcritical CO2 applications, for the first time at the Chillventa 2016 trade fair. One of the benefits of the CRII capacity control: electromagnetic compatibility is not an issue and the mechanical solution has no influence on network quality in buildings.

In combination with BITZER reciprocating compressors, VARIPACK frequency inverters are the flexible solution that can be used in just about any application. Specially developed by BITZER for use in refrigeration and for operation with refrigeration compressors, the external frequency inverters are particularly suitable for simple and reliable capacity control. BITZER software enables application-specific selection of the frequency inverter, whilst the BEST (BITZER Electronics Service Tool) software promotes simple operation and monitoring. Stored databases allow for complete, straightforward configuration of each compressor simply by selecting the compressor model and refrigerant. The new products offer reliability and convenience due to optimal coordination with BITZER refrigeration compressors. With its modular design, the VARIPACK series achieves a high degree of flexibility and opens up a wide spectrum of variants for a large range of applications in supermarkets, hotels, restaurants and food production and processing centres. The series is suitable for refrigeration, air conditioning and heat pumps and can be integrated into both systems with single compressors and compound systems.

The VARISPEED product series is the most simple frequency inverter solution for small and medium-sized reciprocating compressors, as it represents a compact, reliable and convenient option: the suction gas-cooled frequency inverter and the compressor form a compact unit and all the components are factory mounted, making separate installation a thing of the past. The components are fully wired, optimised for EMC – refrigeration and air conditioning engineers don’t have to put any thought into mounting or the frequency inverter and motor wiring. Due to their special design, VARISPEED compressors can be operated at a frequency of up to 87 Hz. However, the VARISPEED series is not available for all BITZER ECOLINE compressors and the frequency inverters have limitations when it comes to the maximum evaporation and suction gas temperature. VARISPEED compressors are therefore not the first choice when it comes to many heat pump applications.

Refrigerants with low global warming potential (GWP) are becoming more and more important in the refrigeration and air conditioning industry in Europe and beyond. And this trend will only accelerate over the next several years. BITZER is therefore not only further developing its compressors and condensing units for use with natural refrigerants such as CO2, ammonia, hydrocarbons and HFO/HFO blends, but also adapting its service to meet current requirements. BITZER has also promoted the qualification and documentation of its semi-hermetic and hermetic compressors, its condensing units and its water cooled condensers with HFO/HFO blends. ‘HFO ready is more than just a term for BITZER,’ says Rainer Große-Kracht, Chief Technology Officer of BITZER. ‘It means that the compressor, the condensing unit or the condenser has undergone full qualification, which at BITZER tends to be extremely demanding. For instance, it can include intensive measurement of the performance data and extensive risk analysis, if the refrigerant in question belongs to the A2L or A3 category.’

Experience with HFO solutions
BITZER’s reciprocating compressors, semi-hermetic and compact screw compressors, and scroll compressors for series application are currently HFO ready. The long-standing company has gained a great deal of experience over the years with the everyday use of HFO applications – under a variety of operating conditions round the globe. ‘We therefore provide system suppliers with the opportunity to respond to end users’ demands and desires for sustainable, environmentally friendly refrigerants. In this way, system operators receive a solution tailored to their specific needs as well as high energy efficiency, reliability, serviceability and sustainability’, Große-Kracht continues.

BITZER will be presenting the new CSVH2 compact screw compressor series approved for HFO/HFO blends to the general public for the first time at Chillventa 2016.
BITZER’s CSH and CSW series have been approved for the R1234yf, R1234ze(E), R513A and R450A refrigerants since the beginning of 2016. BITZER has also further developed the ECOSTAR LHV5E and LHV7E condensing units with integrated ECOLINE VARISPEED reciprocating compressors. For instance, the LHV7E requires less refrigerant than its predecessor. BITZER has also optimised the LHV5E and LHV7E models in accordance with the F-gas Regulation and the EU’s Ecodesign Directive, and approved them for HFO/HFO blends. The long-standing company in Sindelfingen will also be expanding its selection of compressors for HFO refrigerants in the future: the CSVH3, CSVW2 and CSVW3 series will be HFO-ready by April 2017. The Association of European Refrigeration Component Manufacturers (ASERCOM) certified 32 BITZER compressors and condensing units in 2015, thus confirming their efficiency and their high coefficients of performance. These include the ECOLINE reciprocating compressors, which are designed for use with the eco-friendly R448A and R449A refrigerants. BITZER was the first compressor manufacturer to fully test and document the two refrigerants, and has also integrated both of them into the BITZER software. This program makes it simple to configure systems and convenient to select compressors.