Honeywell unveiled Solstice N41 (provisional R-466A), a nonflammable and lower global-warming-potential (GWP) refrigerant for use in stationary air conditioning systems. Once on the market, Solstice N41 will be the lowest GWP, nonflammable, R-410A replacement refrigerant available worldwide. The refrigerant received a provisional number and a preliminary A1 designation from the American Society of Heating, Refrigerating and Air Conditioning Engineers (ASHRAE), a key milestone needed to bring the product to market. 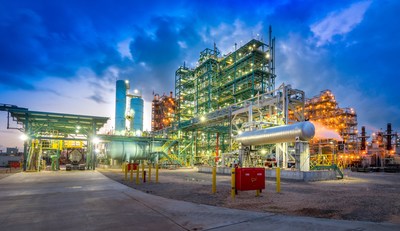 The innovation comes after years of research and development by Honeywell scientists who set out to address one of the most vexing regulatory and safety challenges facing the HVAC industry. All other alternatives proposed to date as R-410A replacements are flammable and require cumbersome changes to safety standards and building codes.

“What we invented and developed in Solstice N41 is a remarkable breakthrough,” said Sanjeev Rastogi, Honeywell vice president and general manager of Fluorine Products. “It is an incredibly promising product that is poised to solve a key problem and potentially become the next big global advance for refrigerants.

With numerous regulations (including Europe’s F-Gas regulation and the internationally adopted Kigali Amendment to the Montreal Protocol) requiring the phase down of high-global-warming products, the HVAC industry has been looking to replace the current industry standard refrigerant, R-410A, with an energy efficient, nonflammable, and lower GWP solution with a similar or better performance. Solstice N41 is the only refrigerant that combines those attributes.

“Solstice N41 offers a unique combination of benefits. With a GWP that is 65% lower than R-410A, it is energy efficient and environmentally preferable,” said Rastogi. “Moreover, the costs associated with moving to Solstice N41 pale in comparison to those required for conversion to a flammable refrigerant. It is the logical economic choice.

In addition, early testing indicates that switching to Solstice N41 would require minimal changes to equipment and no additional training for installation and repair technicians. Preliminary data indicates that the refrigerant may allow OEMs to easily convert from R-410A.

ASHRAE, a highly-respected global organization that dedicates itself to sustainability and research that advances the heating, ventilating, air conditioning and refrigeration industry, determined that Solstice N41 earned an A1 designation, the same as R-410A.

Solstice N41 joins the family of Solstice products which Honeywell developed to accelerate the transition from away from materials with high GWPs. It is expected to be available commercially in 2019.