For years, refrigeration and air conditioning technology has been experiencing extensive changes: In the Montreal Protocol of 1987 it was agreed to ban the CFCs R12 and R22, which had been dominant until then, in order to stop or to repair the destruction of the earth´s ozone protection screen. The once “simple“ refrigeration world became much more complex due to a large number of substitute refrigerants, which not only had different properties, but also required the redesign of compressors. In 1997 an important step towards reducing global warming was taken with the adoption of the Kyoto Protocol: the emission of greenhouse gases has been continuously reduced since then. The consequence for the air conditioning and refrigeration industry is the attempt to contain direct emissions both by reducing the amount of refrigerant in the system and by improving the leak protection of the systems. Increased plant efficiency reduces energy consumption and thus CO2 emissions into the atmosphere. By classifying the refrigerants by to GWP equivalent to the release of CO2 and partly by taxation, the switch to natural refrigerants is motivated. Replacement refrigerants with ever lower GWP values have been and will be brought onto the market in rapid succession, which has caused uncertainty in the industry.

In order to establish natural refrigerants (CO2 = R744, ammonia = R717, propane = R290) as a long-term alternative, standards had to be introduced or adapted and components had to be developed especially for the high pressure levels of CO2. These components were initially responsible for a cost increase, which led to the realization of saving potentials elsewhere to maintain margins and thus to cost pressure.

In the meantime, the natural refrigerants are available everywhere at low cost at refrigeration quality and the component prices have fallen due to the quantity effect. Nevertheless, these effects had an impact on distribution channels and the value chain:

In recent years, every market participant has tried to increase the value added. Today many component manufacturers produce complete systems, wholesalers produce their own systems and plant manufacturers integrate services. Large end-users have brought the expertise in-house and specify/plan their systems in detail; plant builders often became pure installers, who had to specialize within one industry niche.

In addition to and as a result of increased price pressure, the main consequence is the tendency towards standardised, modular systems that come with factory guarantees and leave no room for on-site adjustments or repairs.

The trend has accelerated with the discussions about climate change; new installations are now equipped with natural refrigerants in the vast majority of cases, with CO2 dominating the supermarket sector in particular.

The traditional dividing line between the commercial and industrial refrigeration industry is becoming increasingly blurred, CO2 systems are penetrating into larger capacity ranges, compact ammonia systems are being used in water chillers from 200 to 800 kW, and due to the changes in standards, propane systems with a small refrigerant charge are being increasingly used.

The rapid progression of standards is forcing “ex-freon“ system builders, installers and users to constantly learn and upgrade their skills. Suppliers of systems and components must provide better technical operating instructions and support. Complete packages become more comprehensive and complex with integrated “commercial“ features that go beyond traditional industrial standards.

The quest for higher energy efficiency levels makes the previous methods of condensing questionable by emitting heat to atmosphere. The holistic approach of heating and cooling as the two sides of the energy equation will lead to new grid-based systems where the waste heat will be fed in either directly or boosted up by heatpumps.

Ammonia as a non-ozone-depleting substance without direct influence on greenhouse effects with an energy efficiency at least equal to R22 makes this refrigerant to appear as a long-term alternative. The low price and availability makes it commercially very interesting. However, the high enthalpy difference, which is an advantage for large industrial applications, can make control somewhat more difficult for smaller capacities. Flammability and toxicity do require special safety measures, in particular dedicated plant rooms with automatic forced ventilation, but no measures different or beyond those for other refrigerants such as CO2. The non-miscibility of mineral oil and ammonia requires specific design precautions for oil separation and recirculation during system planning and construction. In the past, the incompatibility of copper and ammonia led to the use of “open“ systems in which the motor and compressor were connected by a shaft. Motor, shaft and compressor need to be aligned, the shaft seal requires some maintenance and must be replaced regularly after a certain period of operation. Dry operation and aging can lead to leaks, which are immediately noticed (also in the further neighbourhood) by the acrid smell of ammonia.

To overcome the apprehension about ammonia and to facilitate the changeover to this refrigerant, SRM, the Swedish pioneer of screw compressors since 1910, has developed a complete semi-hermetic compressor series, which should appeal especially to market participants willing to convert. The product was launched in the market in 2017 the first time and by now the range is completed. 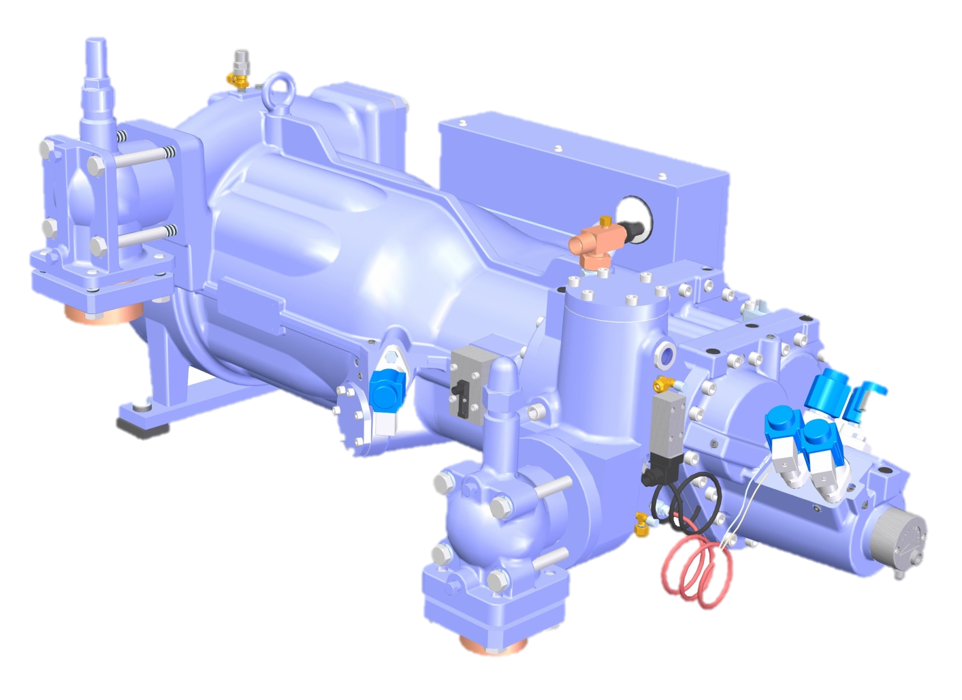 All compressors are equipped with the latest i-profile with 5+7 lobe ratio from SRM, which promises maximum efficiency. Generously dimensioned bearings guarantee low noise and maintenance-free service life of 60.000 operating hours, which in standard operation means 10 years.

The double-stage design allows an extremely compact design for blast freezers and low-temperature applications for which booster systems were used traditionally. This is particularly advantageous in confined spaces such as those found in fishing vessels or containers.

Common to all compressors is the permanent magnet synchronous motor. By using aluminium windings ammonia derived problems are permanently avoided. With a PM motor, small design footprint and still highest efficiency can be achieved.

The larger series can be tuned to the operating conditions by a variable, manually adjustable internal volume ratio Vi between suction and pressure gas or can be switched between summer/winter or day/night operation mode by a switch.

To complement the semi-hermetic compressor, SRM offers a series of oil separators optimized for SRS. Depending on the design and application, the oil separators can be selected for the required capacity and oil separation rate. On prepared saddle welding plates, packagers can flexibly and time-efficiently attach brackets for mounting up to 3 compressors along or across the vessel.

By means of the vertical welding plates, pressure gauge panels and control/terminal boxes can be attached, which in most cases eliminates the need for a frame and contributes to cost and space savings.

Consistent market orientation in close cooperation with customers led to the development of the SRS-C series of compact semi-hermetic screw compressors. They are equipped with a 3-stage oil separator and are therefore predestined for compact chillers for process cooling or air conditioning applications. 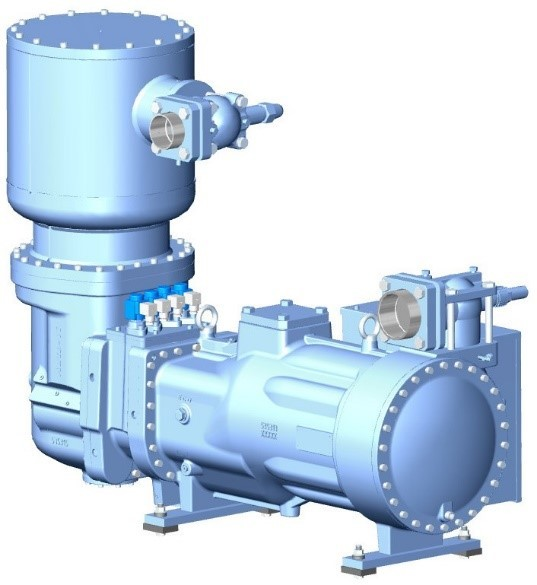 The application window allows the use of evaporating temperatures from -25°C to +15°C and condensing temperature up to +55°C, thus ideally opening up applications with air-cooled condensers.

The automatic, patented Vi adjustment system (independent from external control inputs) ensures optimal operating conditions. The new ActiFlow oil management system ensures automatically that only the amount of oil that is really needed enters the compression process for cooling, lubricating the bearings and sealing the rotors. This reduction in oil leads to a further increase in efficiency. 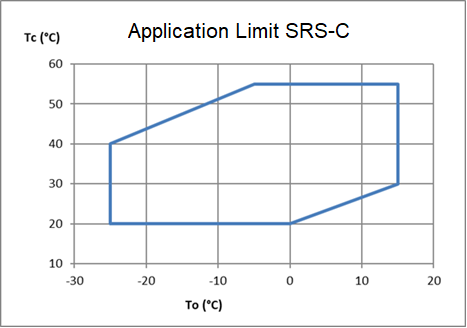 SRS-C allows easy integration into highly efficient water coolers with ammonia as refrigerant. By eliminating the need for an external oil separator, the amount of refrigerant can be minimized further, the reduced piping saves cost and contributes to a lower risk of leakage and helps to decrease space requirements. The market launch will take place in the second half of this year with currently three models, which will be expanded step by step.

Successful projects have been realized with these new products in recent years. In July 2017 a SRS14M Duo-Pack with a capacity of 575kW was put into operation at the Braunlage, Germany, ice rink to replace an existing old system. The challenge was the limited space available at the installation site and the difficult placement. The solution was the linear arrangement of the compressors.

The special application "ice rink" is taken into account by using two compressors, which are only operated together for the ice build-up necessary at the beginning of the season. The absence of a shaft seal reduces the risk of drying out during off-season periods with consequential leaking. This risk prevails particularly in seasonal applications such as wine production, ice machines in fish processing plants with seasonal fish production or pure stand-by/emergency cooling systems.

The world's first air conditioning project using ammonia was completed in Eindhoven, The Netherlands, in 2018. The requirement was highly efficient cooling in summer and heating in winter as a heat pump using a natural refrigerant in a mixed commercial and residential complex. The apprehension about ammonia had to be catered for seriously. The solution was the application of two independently operated SRS14SR units with 400kW cooling and 426kW heating capacity each. 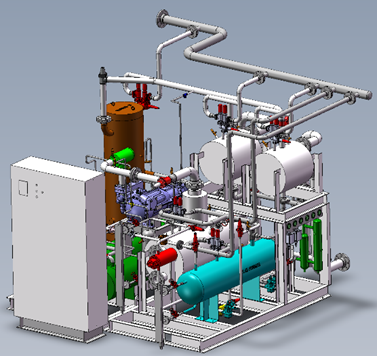 Thanks to the technical permanent leak-proof design principle of the semi-hermetic compressors without shaft seal, optimised refrigerant charge and the use of plate-in-shell heat exchangers, the risk of leakages was minimised and the necessary acceptance was achieved.

The requirement to design a highly efficient low temperature refrigeration system in such a way that it can be relocated after temporary operation after completion of a planned expansion led to another premiere in 2018. Instead of the traditional application of a booster system with two units, the use of a double-stage Duopack was the solution. 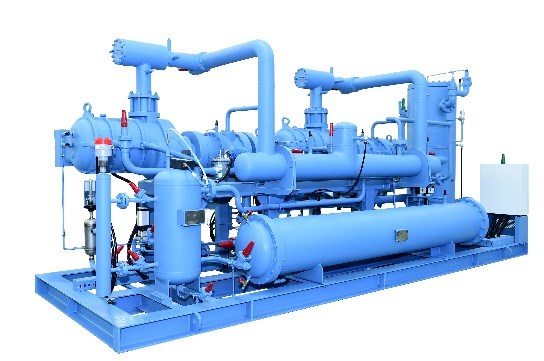 The semi-hermetic double-stage compressor SRS1612LS achieves higher efficiency than a booster system with a smaller size.

As a Duopack in series on a frame with a common vertical oil separator, a narrow unit could be achieved, which was placed in a standard container as plant room.

The module with Qo: 380kW at operating conditions of te: -35°C and tc: +45°C for temporary use is equipped with an air-cooled condenser and can be easily relocated.

The flexible arrangement of SRS compressors as single, duo or triple packs makes in combination with the optimised oil separators the perfect chiller solution for process cooling. Inverter control in conjunction with multi-compressor solutions allows perfect mapping of part load profiles. The decision of an Austrian dairy for 3 x SRS16 was significantly influenced by their low weekend loads and by strong seasonal fluctuations.

Low space requirements due to the compact design were the decisive reason for using a unit for process cooling in a German brewery expansion project with 2 x SRS10L: Qo: 2 x 160kW at te: -6°C and tc: +45°C. An existing plant room could be utilised and construction of a new building could be avoided. 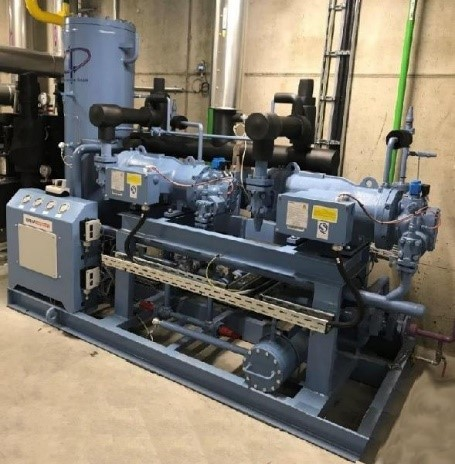 Low-maintenance and technical permanent leak-proof semi-hermetic compressors using the natural refrigerant ammonia in the immediate vicinity of a residential area made the milk-processing company choose the SRS compressor. In this project the compressors are applied in two redundant duo-packs with 223kW cooling capacity each for cheese maturing at constant temperatures using glycol as the secondary medium.

With this solution, the dairy’s motivation to contribute to environment protection and share responsibility for climate change mitigation, process security and the health protection of employees and nearby residents were reconciled in a perfect way.