Under EU No 571/2014 (F-Gas Regulation), European markets are experiencing the start of a drastic phase-down in the availability of HFC refrigerants (a reduction to 63% of the 2015 baseline figure). This is a steep reduction from the 93% availability in 2017, and the refrigeration industry is feeling the effects. For example, during the latter half of 2017 the price of R-404A increased by 700%. R-404A, with a Global Warming Potential (GWP) of 3,922 tCO2e, is not alone in seeing these exceptional price increases. It is one of a group of gases with a GWP of more than 2,500 tCO2e that will be banned from use in stationary refrigeration equipment starting in 2020 (with the exception of equipment designed to cool below -50°C). Additional refrigerants on this list of banned gases include: R-507, R-422A, R-422D, R-434A and R-428A.

The rising prices are not restricted to these high GWP refrigerants. R-134a, with a GWP of 1,430 tCO2e, has also seen increases in the region of 400%. As illustrated in the following chart, a similar price increase is apparent for many other commonly used refrigerants, including R-407C and R-410A. 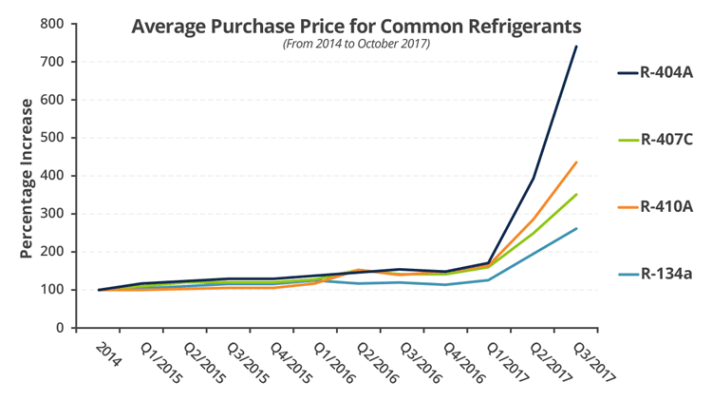 The 2018 reduction in HFC availability is expected to cause refrigerant prices to continue to trend upward. The lower GWP refrigerants (HFOs and HFO / HFC blends) replacing HFCs do not carry the same comparatively low price-tag to which the HVAC-R industry has become accustomed. Higher refrigerant prices are expected to become a global phenomenon as producers struggle to meet end-user requirements while maintaining their production quota.

Leaking refrigerant gases have become more expensive than ever before. It is estimated that, in many cases, the cost of refrigerant loss is now higher than the cost of a technician’s time to repair a leaking refrigeration system. F-Gas mandates that systems containing a refrigerant charge greater than 500 tCO2e have a permanent leak detection system installed. The regulations also increase the required frequency of leak inspections if permanent leak detection is not installed for refrigeration systems containing greater than 5 tCO2e. F-Gas does not provide any guidance as to the type of leak detection systems that can be used, or requirements for the system’s capabilities. Read more