Introduction: A couple of years earlier than expected, 2018 is proving to be a critical year for the entire Refrigeration and Air Conditioning sector. European Regulation 517/2014 provides for a gradual reduction (Phase Down), from 2015, in the use of HFC refrigerants by refrigeration equipment manufacturers. In, this reduction imposed by the legislation must amount to 37% during the current year, while the subsequent steep drop to 45% is to be achieved by 2020. However, we are witnessing a dramatic acceleration of the Phase Down process, in large part due to difficulty in obtaining the most common HFC refrigerants and the consequent sudden and dramatic increase in prices, in accordance with the well-known market rules of supply and demand. This situation is directly controlled by the multinational refrigerant gas producers that have implemented a political and commercial strategy of strong obstruction to the use of widely used refrigerants such as R410a, R134a and R404a. This has effectively forced the entire sector to find and introduce alternative refrigeration fluids.
Alternative low-GWP fluids:
Unfortunately, the full picture on the future of refrigerants is not yet clearly defined; in addition to the more traditional natural gases (hydrocarbons (HC) and R744), new synthetic refrigerants or mixtures have come onto the market that have the common advantage of a low GWP capable of meeting – at least for a few years – the constraints imposed by the European F-Gas directive. However, all the proposed solutions have non-marginal disadvantages or problems that must be evaluated carefully, especially in relation to the application. 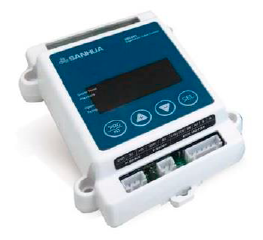 The Retail Food sector appears to be increasingly turning towards the use of carbon dioxide (R744), at least at higher latitudes that allow the equipment to achieve greater levels of efficiency. The problem of equipment efficiency is the main critical issue with CO2, which – due to its physical characteristics (critical point of 33°C) – does not allow a CoP much above 2, even with highly optimised and complex systems. The problem is accentuated in countries with warm climates and electricity production methods still linked to the burning of fossil fuels. Although on the one hand there is a lower possible GWP, on the other hand there is a high consumption of electrical energy, with consequent emission into the atmosphere of CO2 for its production. This is the case with Italy, where we are seeing a very slow spread of equipment using R744, in contrast to what is happening in the rest of Europe, where these trans-critical systems are driving the sector. Sanhua, a market leader in the Air Conditioning sector, has been active in the refrigeration world for only a few years and works with the same professionalism and attention that it has always applied to air conditioning. In relation to CO2, Sanhua is already able to offer a complete range of ball valves for sub-critical applications (CBV series up to 60 bar) and trans-critical applications (CBVT series) [Figure 2]. In this regard, the company offers an innovative product: a valve made entirely from AISI304 stainless steel, with a valve body made from a stainless-steel casting that guarantees maximum resistance even at working pressures well above 100 bar. A Sanhua patent has also made it possible to create a bimetallic connection on joints so that the inner portion of the connections is 99% pure copper for an easy brazing operation with the K65 copper generally used for the piping on R744 equipment. 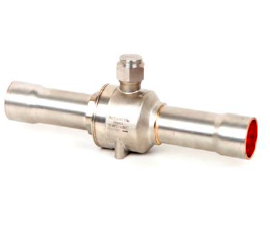 Alternative refrigerant fluids to R410a
One of the sectors that is certainly experiencing the most difficulty due to this revolution in
refrigerants is Air Conditioning. For years, the reference refrigerant for the sector has been R410a,
which since January 2017 has suffered – perhaps more than other products – a major inflationary
impact: the price has more than tripled. In addition to the already mentioned phenomenon of quotas
that restricts availability in Europe, there have been closures of some Chinese plants that produce
R125, the fluid that makes up 50% of R410a. Low and medium-power A/C units, probably driven by
the choices imposed by a few giants in the Asian sector, have tended towards the use of R32, a wellknown
fluid for a long time, partly because it too is a constituent component of R410a. Although this
refrigerant has a modest GWP content, it also has the characteristic of being mildly flammable (A2L),
falls into category 1 according to the PED directive and requires a design pressure of not less than 46
bar. Added to this is the fact that under typical nominal working conditions for an air conditioner, the
exhaust temperature at the compressor is rather high and can reach up to 150°C. This factor means
that this refrigerant tends to be used only in cooling machines (chillers) and poses numerous critical issues for all component manufacturers, whether they are producers of compressors or valves. The
working pressures (PS) above 40 bar, together with the fact of having a group 1 fluid, make it
necessary to certify all valves with DN>25 in category II, a measure that is neither simple nor
immediate to implement. Sanhua is already able to confirm the chemical compatibility of the entire
current range of products using this refrigerant, and is actively working with the certification bodies
to shortly provide the PED certification also needed for larger components with DN>25. At the same
time, the company has also worked for the approval of its products using R452b, which is emerging
as the solution for heat pumps of medium and high power.
Conclusions:
The refrigeration and A/C market is at an epochal turning point: the new environmentally sensitive
regulations and the commercial and economic pressures imposed by the refrigerant producers are
accelerating the drop-in of new low-GMP refrigerants or mixtures. Excluding the transitional
refrigerants, the trend for all "cold" sectors is towards natural or synthetic refrigerants that are
flammable or mildly flammable. This fact obliges all operators in the sector to radically revise the
design of the machines and the choice of components, which must be capable of providing maximum
compatibility and safety even in the event of leaks or accidents. Similarly, the regulations must be
updated to define the new safety standards necessary for using these refrigerants in larger quantities.
Sanhua is a company that sees in this change an important opportunity to become a strategic player
in the sector and is able, through substantial investment in research, to supply excellent products
and state-of-the-art technology.