Study on the practical use of flammable and slightly flammable refrigerants

Climate challenges, transition to 2050 objectives, regulations like F-gas are diving the RACHP sector to use lower Global Warming Potential refrigerants.

However, some low GWP refrigerants lead to other potential risks such as flammability.

Refrigerant classification includes several degrees of flammability and the implementation of these refrigerants into refrigeration systems needs to be carefully addressed.

Thus, partnering with ADEME, AFCE asked COSTIC to carry out a study attached about the practical use of these flammable refrigerants.

Regulatory requirements, in particular via EU Regulation 517/2014 on greenhouse gases (known as the F-Gas regulation), aim to progressively reduce the quantity of refrigerants that have an impact on the greenhouse effect. Under these conditions, the programmed reduction or prohibition of certain equipment and fluids, and the strengthening of leakage controls, encourage the replacement of these fluids by other "more neutral" fluids to the environment. However, some fluids with a low environmental impact do present other risks, such as flammability. The classification has been updated to include a new flammability subclass "2L" for flammable fluids that burn very slowly.

This study aims at characterizing these flammable fluids during the different phases of the life phases of an installation.

A refrigerant is a substance (or a mixture of substances) that ensures the transfer of energy in a thermodynamic system. According to the ISO 817 standard (2014), a refrigerant is classified based on 2 criteria: its toxicity (A or B) and its flammability (1 to 3).

The flammability of a fluid is defined by its capacity to propagate a flame from an ignition source.

Combustion is an exothermic chemical reaction between an oxidizer (air, oxygen) and a fuel. A body is said to be flammable when it burns with the production of flames.


Figure 1. Characteristics related to the flammability of fluids 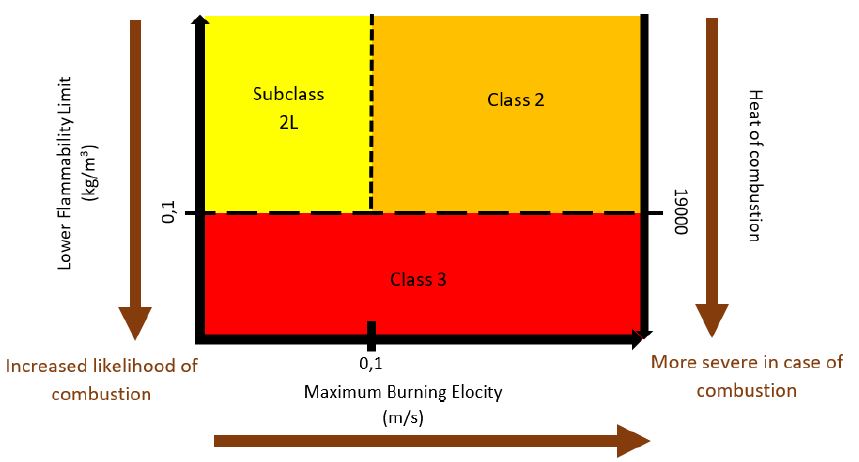 The regulatory and normative context

The regulatory and para-regulatory texts that are applicable to flammable fluids can be different and complementary depending on the type of building or the flammability class of the fluid. The next table summarizes some essential texts according to the field of application and the type of building. These texts deal particularly with the specificities of design (calculation of fluid load, safety measures), installation and operation.

Depending on the fluids, other texts or standards are also to be considered, such as:

All the afore-mentioned texts are further described in this chapter.