The HVAC&R market in the EMEA region in 2020

The market for liquid chiller units with above 50 kW capacity (reversible or non-reversible) in the European Union (including the United Kingdom) stood at EUR 1.1 billion in 2020. As for units rated between 50 and 350 kW, the market recorded a decrease of 8% from the previous year, notably down 22% in the United Kingdom, 18% in Italy and 19% in Finland. As for units with power ratings above 700 kW, the decline was more moderate, down by only 4%, driven down especially by Germany (down 29%), Italy (down 26%) and the Netherlands (down 18%). On the other hand, large increases in this segment were posted in France (up 36%), Austria (up 37%) and Hungary (up 37%).

In terms of refrigerants used for units above 50 kW, the market continues to be largely dominated by R410A and R134a, accounting for 70% and 10% respectively of the units sold. Of the remainder, a third of units used R32, and another third used R1234ze. The final third was divided equally between R407C, R513A and other blended refrigerants (R452B, R454B, etc.). 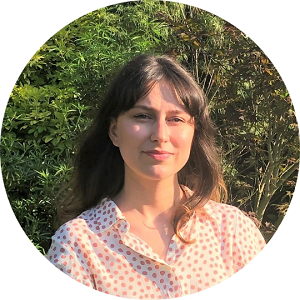 Read the interview with the Eurovent Market Intelligence (EMI) team.

The IT cooling market experienced the greatest change – and has been the most dynamic – in the face of the pandemic. It grew to EUR 716 million in the EMEA region in 2018, of which 43% consisted of room air conditioners (also called CRAC: computer room air conditioners), 15% row and rack coolers, 7% for telecommunications cooling units (portable TLCs) and 37% for air handling units and other evaporative cooling units. The latter segment grew the most, having only accounted for 13% of the market in 2018. The biggest markets were – by order of size – Germany with EUR 123.9 million, the United Kingdom with EUR 73.4 million, Russia with EUR 58.8 million, followed closely by France and Italy.

In the CRAC air conditioner market, the upward trend in units above 150 kW (primarily chilled water systems) accelerated in 2020 with the return of large data centre projects. Several countries drove this growth, with Germany leading the way, followed by the United Kingdom, France, South Africa, Egypt, Switzerland, and the Gulf countries.

The market for external VRF air conditioners stood at 216,670 units sold in Europe in 2020, a decrease of around 5% in comparison to 2019. However, this overall decline masks contrasting situations in the various countries: Turkey, the largest market in Europe, saw an approximate 10% rise in sales, while France, Italy and Germany, the next largest markets, saw sales fall by 8% on average.

In terms of the segmentation of the market, the increase in high-power VRFs continued, with units with a capacity of more than 50 kW rising from 15% in 2019 to 16.1% in 2020. Top flow units remained the most common, making up around 55% of units sold, however they are gradually losing ground to side flow units. In indoor units, cassette units were the most common (41%), compared with duct units (31%) and wall units (22%). 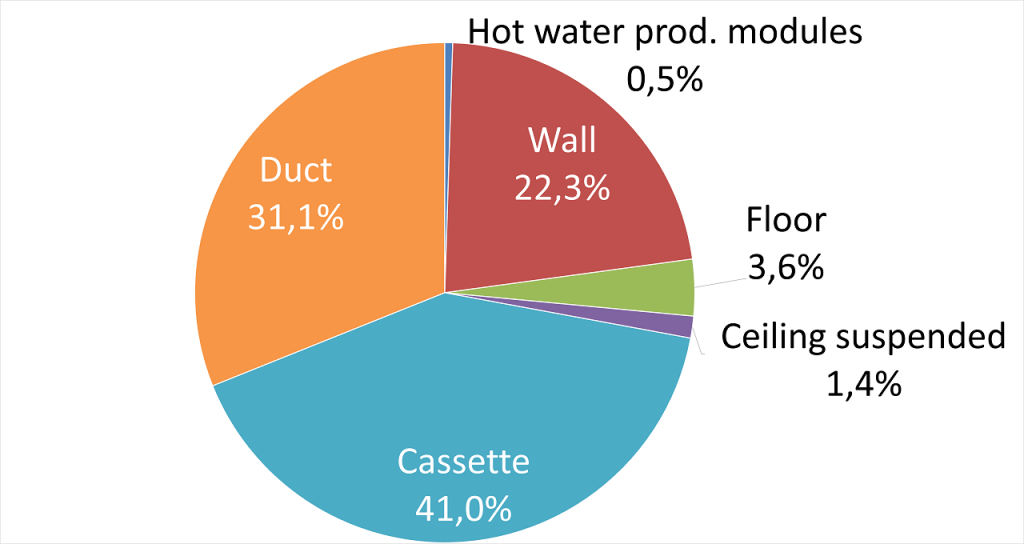 Medium capacity units, between 17 and 120 kW, account for three-quarters of sales in Europe. Reversible rooftop units were also still the most popular, accounting for about 75% of the European market. Energy recovery units made up 20% of the market. 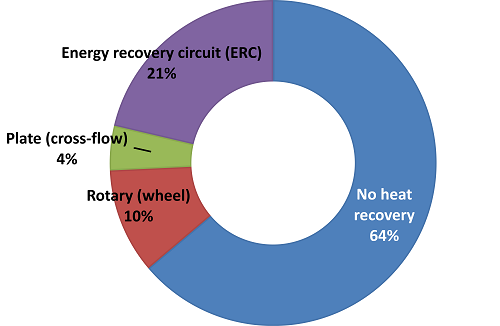 The European fan coil market lost 7%, falling to 1.29 million units in 2020. Pandemic restrictions were the main cause for this, with a noticeable drop in almost all European countries. The EU-28 saw a decrease of 8.9%, mainly due to sharp falls in large markets such as France (down 13.6%), Italy (down 12%), Spain (down 15.4%) and the United Kingdom (down 21%). The losses were relatively weaker in certain countries where restrictions were less strict, such as Turkey (down 6.8%) and Sweden (down 7.3%). In contrast to the overall trend, some European markets experienced growth, such as Germany (up 4%) and Romania (up 9.2%). It is also worth noting that Denmark was the European country that experienced the largest increase between 2019 and 2020, with an increase of 22%, with sales rising to 4,900 units in 2020.

Despite the downward trend, the market distribution of the various types of fan coil units remained stable, with 2-tube units continuing to account for three-quarters of the market. From a design point of view, fan-coil units with and without casings still accounted for 27% and 32% of the market respectively, and cassette and duct models shared the remaining market. 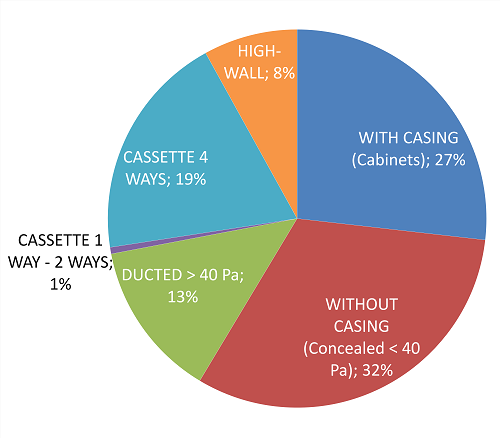 The European air handling units market fell to EUR 2.2 billion after a small decrease in 2020 (down 2.8%). This change was primarily influenced by Germany, the largest European market, which was relatively stagnant (down 2.4%) at EUR 413 million. Similarly, Northern Europe, the second-largest market, was also very stable in 2020 (EUR 387 million, down 2.2%). The third-largest market, Eastern Europe, experienced a slightly larger drop (EUR 307 million, down 4.8%) which is in line with the overall change in the EU-28 (down 4.5%). The difference between EU-28 and total European market is primarily driven by strong growth in countries outside of the EU such as Russia and the CIS countries (EUR 185 million, up 11.7%).

It is also of note that air handling units with integrated controls represented the majority of sales in Europe (57%) and compact units made up almost 50% of sales.

In terms of energy class, class A or A+ units made up two-thirds of sales in Europe, with class A+ units making up the majority (accounting for 40% of units). 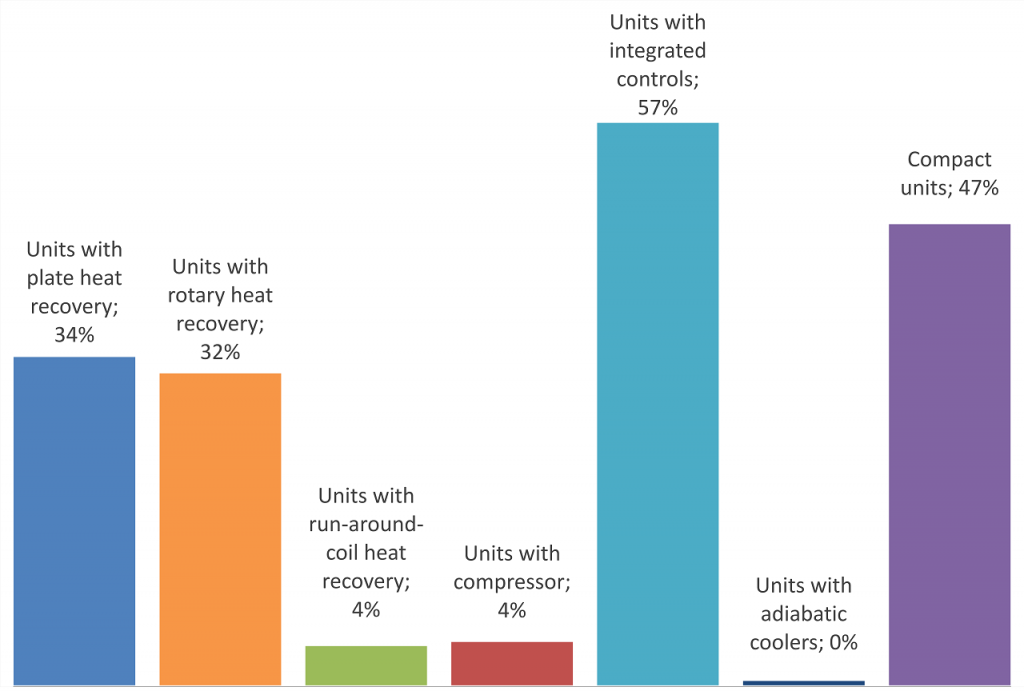 The market was down overall for heat exchangers but suffered less from the crisis than other products. For evaporators and condensers, sales in Europe stood at EUR 348 and 171 million respectively in 2020, with evaporators stable but condenser falling by 13%. For dry coolers, the market rose to EUR 312 million, up 1.2% against 2019.

In evaporators, the decreases were strongest in Italy, Ireland, and South Africa, down 25% on average. The strongest growth, up by over 10%, was in France, Bulgaria, Sweden, Turkey, and Russia. In dry coolers, the countries most impacted by the crisis, down by around 20%, were Belgium, the Netherlands, and Ireland. On the other side of the scale were Portugal, Switzerland, Denmark, and Turkey, each experiencing strong growth (up by 10% or more).

The European cooling towers market shrunk by 14% in 2020, standing at EUR 130 million. It was dominated by Germany, whose market remained stable in 2020 at EUR 34 million. The next largest markets were Italy, France, the United Kingdom and Poland. These five countries alone account for close to 70% of the European market.

The European market continued to be dominated by low-power units, with fewer than 10 cells (over 50% of sales). As for the distribution between open and closed cooling towers, they were almost even at 51% open and 49% closed. 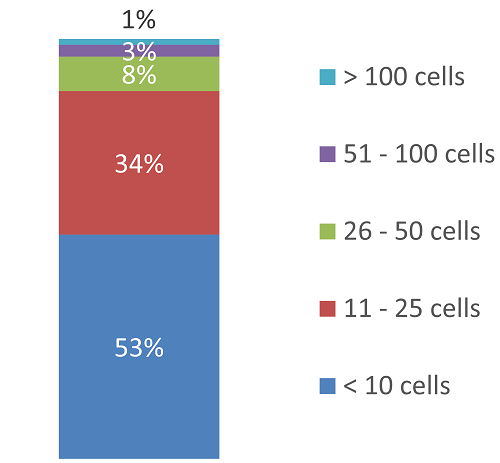 The European market for air filters grew by over 4% in 2020, with total sales of around EUR 1,050 million. This growth was mainly driven by the two largest countries, Germany, and France, which together account for one-third of the market and experienced growth of around 6%. The Nordic countries, however, which made up almost 20% of the European market, did not experience this growth, instead of stagnating in terms of sales.

Looking at Air filter categories, the most used Air filters were category ePM1, ePM5 and ePM10, making up 54% of the market, far ahead of coarse filters (24%). In terms of design, bag filters continued to dominate the market, even though they showed a downward trend with panel filters more favoured, with 41% and 34% of the market share in 2020, respectively. 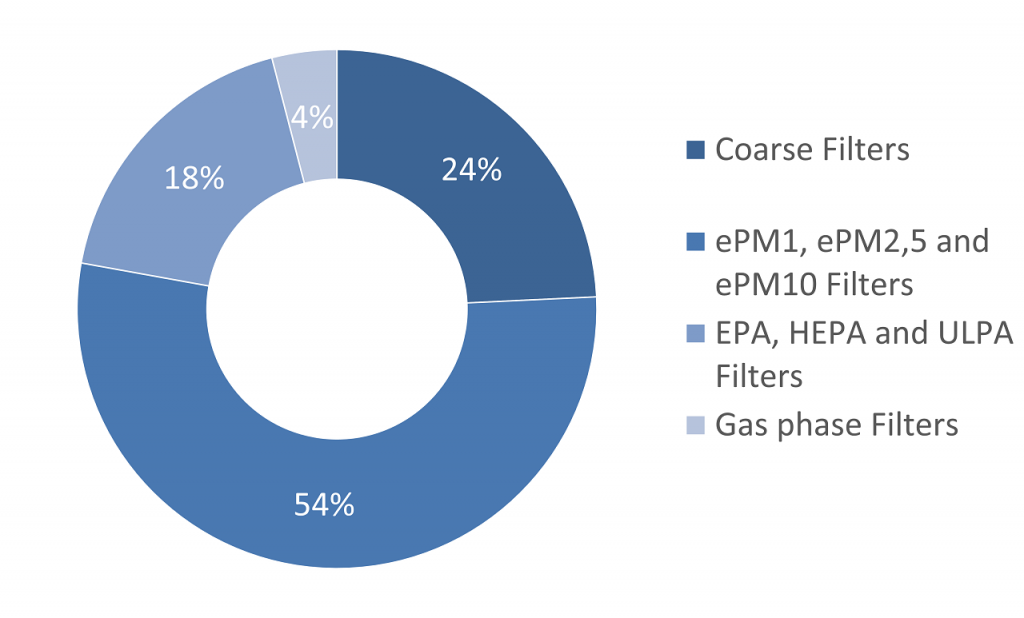 The single-flow pool dehumidifier market fell by 20% in 2020 in the EMEA zone, representing a little over 5,000 units sold. This drop was observed in all regions of the EMEA zone but was particularly noticeable in Italy, Spain, Portugal, and Germany. Turkey and the United Kingdom were the only countries where sales increased compared to 2019. The single-flow market accounted for 60% of the market in 2020.

Making up the remaining 40% of the market, the double-flow market also saw sales drop by 19%, with close to 3,500 units sold. The drop was between 10% and 38% in all EMEA countries, except for Turkey where sales rose by 3%. 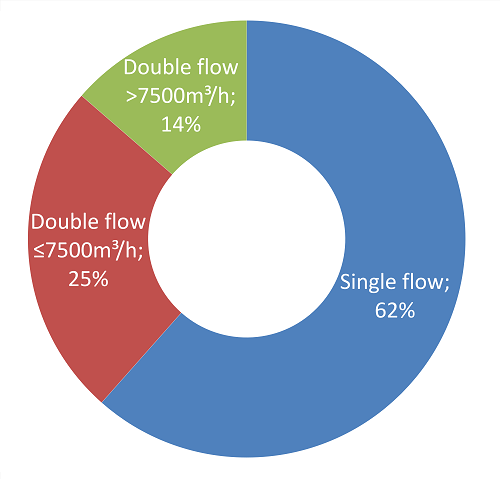 The European chilled beams market fell by 12.3% in 2020, standing at EUR 63.2 million. This drop was driven by Sweden, the largest market and making up one-third of the overall European market, and other large markets such as the Netherlands, Germany, and France. In Northern Europe, the year was however relatively stable (up 0.9%) due to strong growth in Norway, Finland, and Denmark. In Eastern Europe, the second-largest market for chilled beams, there was also growth, although this was slightly weaker (around 11%). The region with the highest growth was Russia and the CIS countries (Commonwealth of Independent States), where chilled beam sales rose by 33.3%, positively impacting the European market while the EU-28 market fell (down 15.1%).

Active chilled beams, which constituted 95% of sales, remained the most used in Europe. Among these, 85% were integrated and 15% were independent. 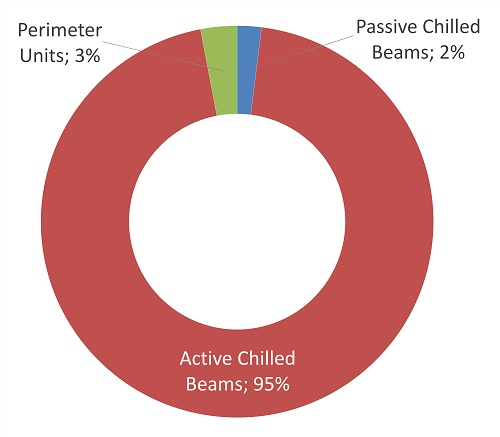 In the EMEA zone, air curtains for the design, commercial and retail markets saw a decrease of 10% in 2020. However, they continued to make up the majority of units sold (93%). The remaining 7% were sold to the industrial and cold room markets.

The downward trend did not change the market structure in terms of the types of air curtains sold. Electrically heated air curtains continue to be the most common and account for nearly half of the European Union market, and three-quarters of the EMEA market. 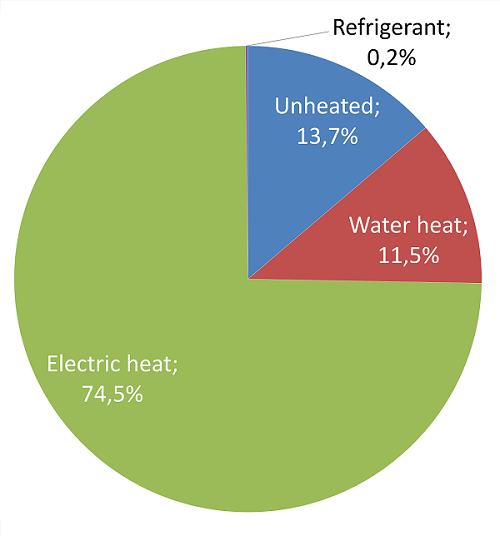 The adiabatic cooler market continued the upward trend it began in 2018, with a growth of over 20% in 2020 in Europe. France and Germany made up over half of the European sales, standing at close to EUR 92 million in 2020. The United Kingdom, Switzerland, Italy, and the Netherlands were the next largest markets, together accounting for over 25% of the European market.