Ammonia seen as price-competitive with HFCs

Gordon Brothers’ Scott Clydesdale predicts a bright future for ammonia as a refrigerant in Australia. 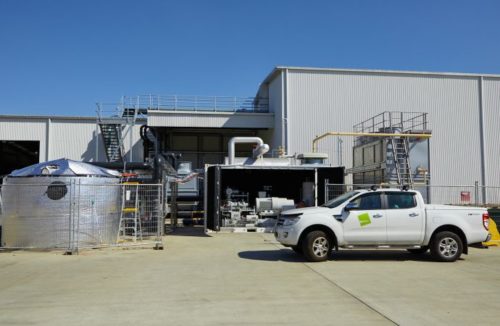 Ammonia has a bright future in HVAC&R applications in Australia, according to industrial refrigeration contractor Gordon Brothers Industries Pty Ltd. The lion’s share of Gordon Brothers’ turnover comes from ammonia plants. “No real volume of HFC plants exists in our market, as NH3 has always been preferred,” Scott Clydesdale, senior project engineer at Gordon Brothers, told Accelerate Australia & NZ magazine in an exclusive interview. “In the past, ammonia has been the weapon of choice for any reasonably sized refrigeration plant, so the vast majority of our market has used ammonia,” Clydesdale said.

Competing with HFCs
Gordon Brothers sees ammonia becoming more competitive with HFCs even at smaller capacities. “In the past, small cold stores would have been HFCs,” Clydesdale said. “But there is definitely some penetration of ammonia into that market now, because it’s becoming more cost-effective to install smaller ammonia plants.” In the past, he argued, ammonia compressors were too large and too expensive to be viable alternatives to HFCs for smaller scale operations. “Now, there are smaller compressors available,” he observed. “This has been the change in the past five years and which will continue into the next five – it’s no longer ammonia if you’re big, and Freon if you’re small.” Clydesdale argued that it is now financially viable to install ammonia systems in small cold stores too. “It means the line in the sand between ammonia and HFCs is disappearing.” “Price drives everything,” Clydesdale said. “As soon as there is a price reason for choosing natural refrigerants, then that will be what everyone does,” he added. Among its other flagship natural refrigerants projects, Gordon Brothers boasts the largest CO2-based freezer plant in Australia in its portfolio. “We do CO2 and we know CO2. Yet there is a certain amount of misinformation out there,” Clydesdale argued. “Clients see CO2 as the ‘be all and end all’,” he said. “But CO 2 is only cost-effective if you have to make it really, really cold, like -50°C. If you can get away with -30°C, then it swings back to the ammonia model as being the most cost-effective.” Clydesdale argued that there are “a few gaps” between perception and reality in this debate. “‘Carbon dioxide is good’ – well, yes it is, but in some applications, it’s not as good as ammonia,” he said.

Providing ammonia training
As natural refrigerants become increasingly mainstream HVAC&R options to help businesses to comply with the global HFC phase-down taking place under the Kigali Amendment to the Montreal Protocol, closing the so-called ‘training gap’ by making sure that enough technicians are trained to use them is crucially important.

“There’s plenty of training out there for those who want to find it,” Clydesdale insists.

As the biggest contractor in Australia, Gordon Brothers plays a key role in closing the training gap by training its clients itself.

In the United States, meanwhile, the Ammonia Safety & Training Institute (ASTI) is dedicated to making ammonia the safest managed hazardous material in the world, according to its mission statement.

“We’ve sponsored ASTI to come to Australia and give ammonia safety seminars around the country,” Clydesdale said.

Apprentices also come through Gordon Brothers. “We tend to be more on the front foot with training than others might be,” Clydesdale said.

He observes that installers are becoming more comfortable with the technology and suppliers are more supportive.