BITZER, the world’s largest independent manufacturer of refrigeration compressors, has been successful in the Japanese market with its own subsidiary since late 2007, and plans to keep it that way: BITZER Japan K.K. would like to expand over the next year and become the region’s leading supplier of reciprocating compressors in CO₂ compound systems. 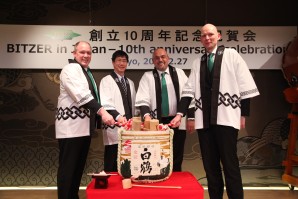 The traditional sake ceremony which kicked off the anniversary celebration (from left to right): Rainer Große-Kracht (BITZER CTO), Seiichiro Chigusa (President of Nissin Refrigeration & Engineering Ltd.), Gianni Parlanti (BITZER CSMO) and Ferdinand Spannan (Managing Director of BITZER Japan At present, BITZER Japan’s most important product group is reciprocating compressors, ranging from proven models to innovative series for CO₂ applications. And this level of success is a testament to BITZER Japan itself as a subsidiary: ‘Positive developments over the past ten years demonstrate that the decision to establish the subsidiary was absolutely right,’ explains Ferdinand Spannan, Managing Director of BITZER Japan.‘The deciding factors were primarily the promising economic prospects in the technically advanced Japanese market.’ Over the long term, BITZER Japan would like to occupy a large part of one market that’s still in its initial phase: reciprocating compressors for CO₂ compound systems.

In 2012, BITZER Japan moved its headquarters from Tokyo to Osaka and now also has a sales office in Japan’s capital city. ‘Japan is not only a highly attractive market in terms of business, but also in terms of technology. Many suppliers throughout Asia look to Japanese solutions for inspiration. Of course, many tasks are a real challenge in such a technologically advanced country, but we’ve managed to overcome them all. For instance, a variety of projects with CO₂ heat pumps for heating water proved to be demanding due to the high pressures,’ explains Spannan.‘A large, high-quality range of services is one of our strengths: with our extensive range of reciprocating, screw and scroll compressors as well as condensing units, we can offer customers just the right solution for any application.’

Active in Japan for more than ten years

Another success: over the past ten years, BITZER has developed a reputation in Japan as a manufacturer of high-quality compressors and a reliable partner. Thanks to the subsidiary, BITZER has also gained real insight into the desires and requirements of users in the region, which, for example, have had an impact on the product design of the next generation of compressors and condensing units.

Even before BITZER Japan was founded in 2007, the specialist in refrigeration compressors had maintained close business relationships with the Japanese refrigeration and air-conditioning market. Back then, BITZER employees at the Hong Kong site looked after customers in Japan.BITZER Japan is now closely connected to the application engineering unit of BITZER’s competence centre for reciprocating compressors in Schkeuditz and competence centre for screw compressors in Rottenburg – and the uncomplicated communication is paying off: ‘Exceptional collaboration with other sites has played a key role in our success and continues to do so to this day. Although large-scale Japanese system manufacturers produce the compressors used in their own factories, we’ve recognised and exploited the potential in technologically demanding applications,’ says Ferdinand Spannan.