Changes to the Schmitz Cargobull Supervisory Board 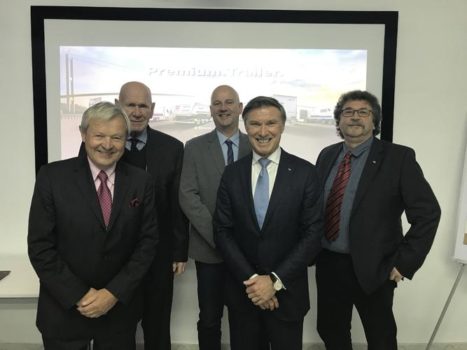 The second new Member of the Supervisory Board will be Robin J. Stalker. After studying Business Economics at Massey University in New Zealand, Robin Stalker began his career in 1982, when he started work as an ­auditor ­for Arthur Young (now EY) in New Zealand and London.

He then worked in a range of roles in the field of finance and controlling for the entertainment industry in Asia and the USA, including posts at United International Pictures and Warner Bros. International.

In 1996, Robin J. Stalker moved to adidas AG, where he was appointed to the Board of Management in 2001, taking control of the Finance division. He was also appointed as Labour Director in 2002. Mr Stalker remained on the adidas AG Board of Management until his retirement in May 2017. Robin J Stalker is also on the Supervisory Board at Schaeffler AG and also a member of its Audit Committee. He will take over from Dr Winkels as Deputy Chairman of the Supervisory Board and Head of the Financial and Audit Committee.  Dr Alexander Winkels is one of the founding members of the Supervisory Board of Schmitz Cargobull and remained a member for 18 years. He will be devoting himself to new challenges in future.

The Supervisory Board, Board of Management and the entire Schmitz Cargobull workforce would like to express their sincere gratitude to Dr Kunibert Schmidt, Dr Alexander Winkels and Karl Röhricht for everything they have done for the company.