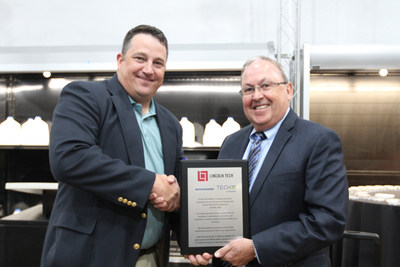 "It's an exciting day both for our organization, and for Hussmann," says Steve Buchenot, Group President at Lincoln Tech. "Opening the TechX training facility will spell incredible new career opportunities for our graduates, and it will reshape the way one of the world's top HVAC/R manufacturers builds its workforce. We're proud to have been chosen as the site for this facility, and we look forward to a long, mutually beneficial relationship with Hussmann."

The center will serve as the nation's first training site for students interested in pursuing HVAC/R (Heating, Ventilation, Air Conditioning and Refrigeration) careers with Hussmann, a leading global manufacturer and supplier of commercial refrigeration equipment. Hussmann has agreed to cover tuition, transportation and housing costs for students accepted into the two-month advanced training program, meaning applicants from anywhere in the country can come to Grand Prairie, train in the TechX Center, and be on their way to a full-time career.

"If you're an HVAC technician, your world is golden, especially in a company like Hussmann," says Donna Ward, the company's Director of Human Resources. "You wouldn't believe the number of people within our organization, all the way up to the ranks of CEO, who started as technicians. The direction you take is limited [only] by you."

The Lincoln-Hussmann partnership was designed to help Lincoln Tech HVAC/R graduates start rewarding careers in the industry, and to aid Hussmann in building a steady pipeline of talent for positions on their teams across the country and around the world. Not enough candidates in today's job market have the proper skills for maintaining and repairing Hussmann equipment, and there is always a demand for trained technicians – a point Hussmann's VP of Branch Operations, Ashley Turner, elaborates on.

"About five years ago, the U.S. Department of Labor announced a shortage of about 70,000 skilled HVAC technicians nationwide due to retirements and industry growth," Turner says. "Our dilemma? How would we create the next 100 years' workforce? After reaching out to numerous vocational schools, we moved forward with Lincoln Tech. We were very impressed with the corporate sponsorships they had with other business sectors."