SANHA will supply NiroTherm system for the Biology Department

The Johannes Gutenberg University in Mainz will soon be expanded by the construction of the second institute building for the Faculty of Biology. It is planned to install the technical systems by autumn 2020. SANHA will supply most of the piping systems used, as well as for the first construction phase. 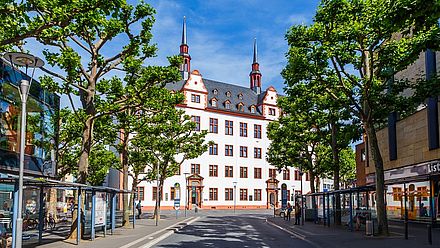 Next step in restructuring

The second institute building for the Faculty of Biology will soon be built on the campus of the Johannes Gutenberg University. In addition to the Institute of Molecular Physiology of the Department of Biology, the Department of Biochemistry of the Institute of Pharmacy and Biochemistry and the Institute of Biotechnology and Drug Research will be added later.The first construction phase, very close to the Botanical Garden, is expected to be completed in the course of this year after a construction period of three years.With the support of the state government, the university invested around 42 million euros in this so-called BioZentrum I for modern life science research. This was an important step towards the restructuring of biology and the further expansion of the life sciences in Mainz. Another advantage is the close proximity to other areas of the natural sciences such as the Institute of Molecular Biology.

An example of installation can be found in the BioZentrum I. Starting from the technical centre in the basement, the backbone from which the extensive branches branch off, the heating, cooling and drinking water installations were carried out. When using Sanha systems, the craftsmen were able to rely on the advantages of the unique combipress processing feature: The processing of the pipes and fittings is considerably simplified by the properties tool compatibility, sliding adhesion and "unpressed leaking" and processing reliability is increased.Existing tools with different original press contours (V, M and SA) can be used without problems up to and including 54 mm. For larger dimensions, the original contours SA and M can be used. For the tradesman, this means easier handling and greater safety when pressing, because the tool compatibility virtually eliminates the possibility of damaging mix-ups of pressing jaws on the construction site.

The sensitive area of drinking water installations was implemented with the NiroSan pipe system. This is a high-quality product series made of stainless steel. The system consists of press fittings with a moulded part seal made of EPDM and the optimally matched system pipes. All press fittings are made of the materials 1.4404 (for the moulded parts) and 1.4408 (for the threaded parts, in stainless steel investment casting). The material 1.4404 contains at least 2.3 % molybdenum and has a lower carbon content than the conventional material 1.4401.It thus impresses with its significantly higher corrosion resistance. The NiroSan press system has all tests and is approved by all well-known European certification bodies. The product portfolio covers the dimensions from 15 to 108 mm, the maximum operating pressure is 16 bar. In addition to its high quality, NiroSan scores with its flexible range of applications, including bending, which is much better made possible by the manufacturing process with TIG welding and the resulting homogeneous and flexible welding seam. During processing, great care was taken to close pipe openings at every interruption of work. This care is essential for reasons of hygiene, as registered dirt particles would inevitably lead to problems later on.The NiroSan pipeline system was used up to a dimension of 35 mm.

The university building will be equipped with the NiroTherm press system for the refrigeration sector. The pipe system consists of high-quality stainless steel press fittings with a black EPDM (ethylene-propylene-diene rubber) moulded part seal and stainless steel pipes to DIN EN 10312. NiroTherm offers a sensible, high-quality and economical alternative to closed systems made of conventional materials, such as carbon steel, because it often saves high labour costs for complex insulation against moisture.NiroTherm press fittings are marked with a red dot on the outside in addition to the system designation. They can thus also be easily distinguished from other fittings on the construction site.

The responsible persons chose SANHA-Therm for the heating piping. This is an extremely economical solution.