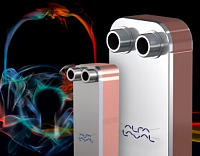 Around the world, people rely on double-wall heat exchangers to meet the needs of heating and cooling applications where safety is as important as thermal performance. Alfa Laval is now taking this technology a step further with the launch of a new double-wall brazed plate heat exchangers. With a unique design, the new models provide both the market’s greatest protection against mixing of fluids as well as increased heat transfer efficiency.

In some markets, double-wall plate heat exchangers have long been viewed as a dependable solution for domestic hot water and other duties where cross-contamination of media is a critical concern. In fact, a number of European countries and localities in the United States have begun requiring double-wall technology for these types of hygienic applications. Traditionally, double-wall gasketed plate-and-frame heat exchangers have been used for these purposes. Today, however, the market is seeing growing demand for brazed double-wall designs that enable the same level of security but with a smaller system footprint.

“Double-wall gasketed heat exchangers make a lot of sense for larger hygienic systems,” explains Fredrik Ekstrom, President of the Brazed & Fusion Bonded Heat Exchangers Business Unit at Alfa Laval. “But today, a growing number of customers are turning to brazed heat exchangers especially for residential systems, due to the reduced CAPEX and the much more compact design. Alfa Laval developed our new generation of double-wall brazed technology to help them meet these demands with increased security as well as improved thermal efficiency.”

Triple the peace of mind

A key feature of the new brazed heat exchangers is what Alfa Laval has dubbed the “three-barrier” technique. This refers to a combination of the traditional double-plate pairing along with an added barrier, or “vent,” formed by an air gap between the two channel plates. In extremely rare cases where a leak could occur, this design allows it to be immediately detected from outside the unit, thereby minimizing the possibility of media mixing.

“Many manufacturers of double-wall heat exchangers promise so-called ‘leak proof’ technology that relies solely on brazing together two plates to form a double-thick wall,” Enrico Dall’Armellina, Head of Marketing & Product Management for Brazed & Fusion Bonded Heat Exchangers at Alfa Laval. “In some places, for example certain U.S. states, labelling such heat exchangers as double walled is even enough to meet legal requirements. However, when a crack does occur on these plates, there is no way to detect it, and this can ultimately lead to cross-contamination of the media. Our design eliminates that risk.”

Reduced impact to efficiency – and size

Up until now, introducing an air vent between double-wall plates has meant settling for significantly reduced efficiency for the heat exchanger. To make up for this trade off, some suppliers have had to increase the heat transfer surface of their channel plates by as much as 30%. This, in turn, leads to a larger size and footprint for the overall unit.

“People choose brazed plate technology specifically because it offers a compact, highly efficient solution for heat transfer,” notes Paul Kellet, Senior OEM Manager at Alfa Laval. “With the experience Alfa Laval has from more than 80 years of working with heat exchangers, we set out to solve this challenge with a double-wall design that ensured ultimate security without sacrificing on thermal performance.”

Thanks to a unique plate design, Alfa Laval has been able to implement the three-barrier technique with minimal loss to the overall efficiency of the unit. The new generation of double-wall brazed heat exchangers can therefore provide nearly the same thermal performance as similarly sized single-wall models, with low pressure drop and zero risk of media mixing.

“This means, for example, that our double-wall CB18 model is similar in size and footprint to our single-wall CB18 units and has the same port configurations,” Kellet continues. “System builders therefore get increased flexibility to adapt to different customer application needs without altering the surrounding system configuration.”