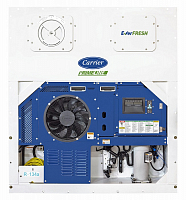 Building on the pioneering legacy of the refrigerated container shipping industry’s first controlled-atmosphere system 25 years ago, Carrier Transicold has developed the next-generation EverFRESH system, which makes premium performance more affordable than ever for fleets and container leasing companies.

The new EverFRESH system was unveiled for attendees at Intermodal Europe 2019, the world-leading exhibition and conference for companies associated with the container and intermodal industries.

Using active controlled-atmosphere technology, the EverFRESH system optimizes the balance of oxygen and carbon dioxide within a refrigerated container, slowing respiration and the natural ripening of the commodity inside. Thus, it helps to preserve the quality of perishables beyond what refrigeration alone can do. As an active system, it generates high-purity nitrogen to more quickly and responsively displace oxygen, rather than relying on respiration alone to gradually reduce oxygen levels.

“Another key benefit of the EverFRESH system’s active technology is that it maintains a positive air pressure within the container, making it far less sensitive to box leakage than other types of systems,” Taeckens explained.

Key components are a sensor package, nitrogen membrane separator, air compressor and air filters. In use, the compressor pulls fresh air into the system, which then removes water vapor from the compressed air stream before it enters the membrane separator. The hollow-fiber media of the separator extracts oxygen and captures carbon dioxide, discharging concentrated nitrogen into the container. If supplemental oxygen is needed, the membrane can be bypassed. The EverFRESH system can independently maintain oxygen at user-selected levels between 3 – 17% and carbon dioxide at between 2 – 19%.

Optional ethylene absorbers can be added for perishables where elevated levels of the hormone are a concern.

All EverFRESH systems have pre-trip inspection routines that test the membrane and compressor to make sure they are functioning normally prior to use.

The new EverFRESH system will be available in early 2020 for Carrier Transicold PrimeLINE refrigeration systems equipped with the Micro-Link 5 controller option.

“Carrier Transicold was the first to introduce the container shipping industry to the advantages of controlled-atmosphere shipping with our EverFRESH system,” Taeckens said. “While the original design had a very strong following, the costs associated with its components and associated controls limited its adoption. Today, our technology has improved to the point that we are pleased to be able to offer an active system that is significantly more affordable. It is also much less complex and easier to service than competitive systems.”

With the new EverFRESH system, Carrier Transicold now offers customers a choice of two controlled atmosphere options, the other being XtendFRESH, a modified system that uses a scrubber to remove carbon dioxide and ethylene from atmospheres within a container.