The HVAC&R Market in the EMEA Region in 2018

Eurovent Market Intelligence (EMI), the European Statistics Office for the HVAC&R market, has just published the results of its studies for 2018 sales in Europe, Middle East and Africa (EMEA), based on the data collected from a large number of industry manufacturers.

To mark this occasion, we interviewed the Eurovent Market Intelligence (EMI) team. Read the interview 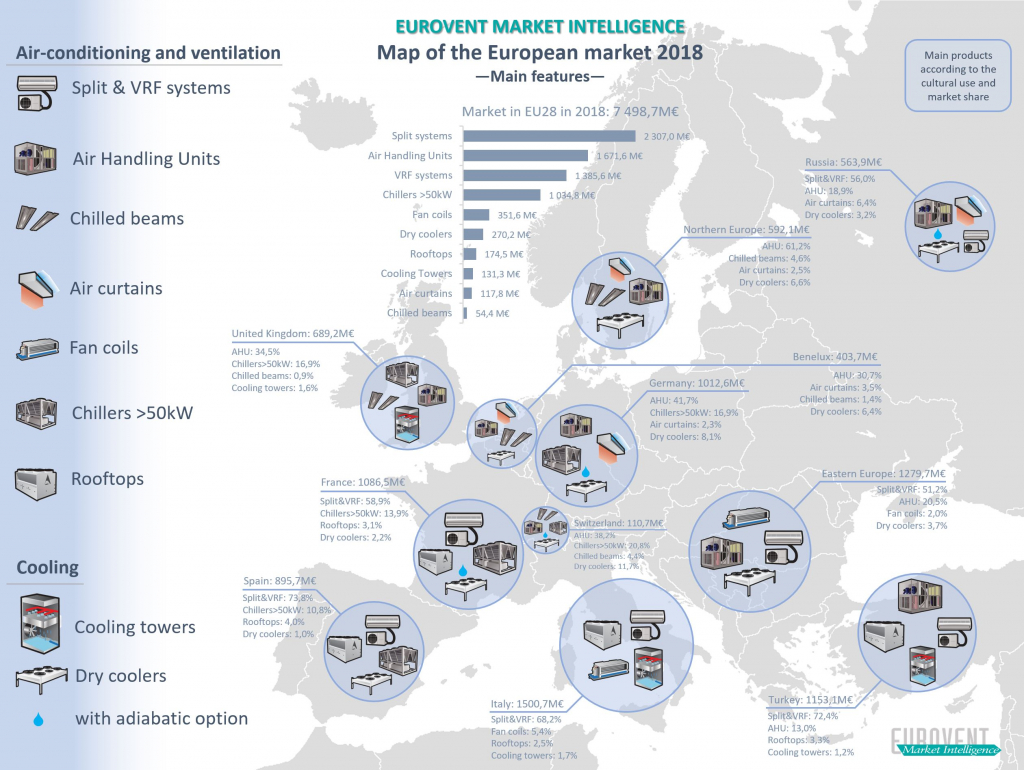 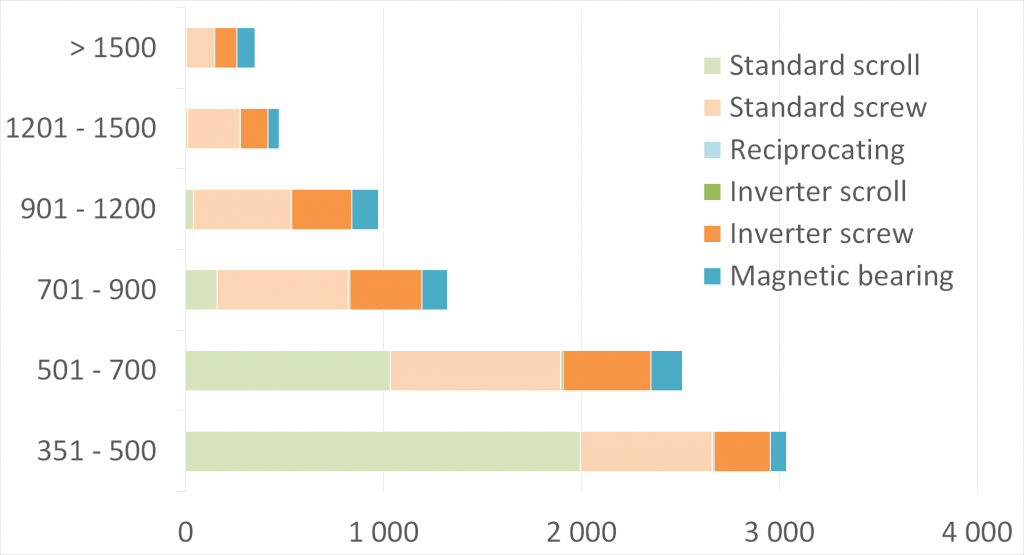 In terms of refrigerants used, the market continues to be largely dominated by R410A and R134a. New refrigerant blends (like R-513a) and HFOs (like R-1234ze), which have grown rapidly in comparison with 2017, however still only make up 1% of the units sold in Europe. In terms of air-cooled units, the standard compressors are generally scroll-type for capacities up to 700kW and screw-type for higher capacities, with a transition point of using an inverter at 200kW. In terms of water-cooled units, the scroll to screw tipping point is at 500kW for standard compressors, while for inverter compressors, the market starts at 200kW, almost equally shared between inverter screws and those with magnetic bearing.

The IT Cooling sector

The IT Cooling market rose to 427 million euros in the EMEA region in 2018, comprising 58% room air conditioners (also called CRAC – Computer Room Air Conditioners), 19% self-contained air conditioners (row and rack coolers), 10% mobile TLCs and 13% AHUs. The biggest markets are – by order of size – Germany with 63.1 million euros, the United Kingdom with 53.2 million euros, France with 32.1 million euros and Italy and Russia with 24 million euros each. In the European Union, the growth of CRAC and RACK units has been slightly negative, whereas TLC and AHU units have experienced an increase of about 10%.

CRAC & RACK market in EMEA - focus on some trends 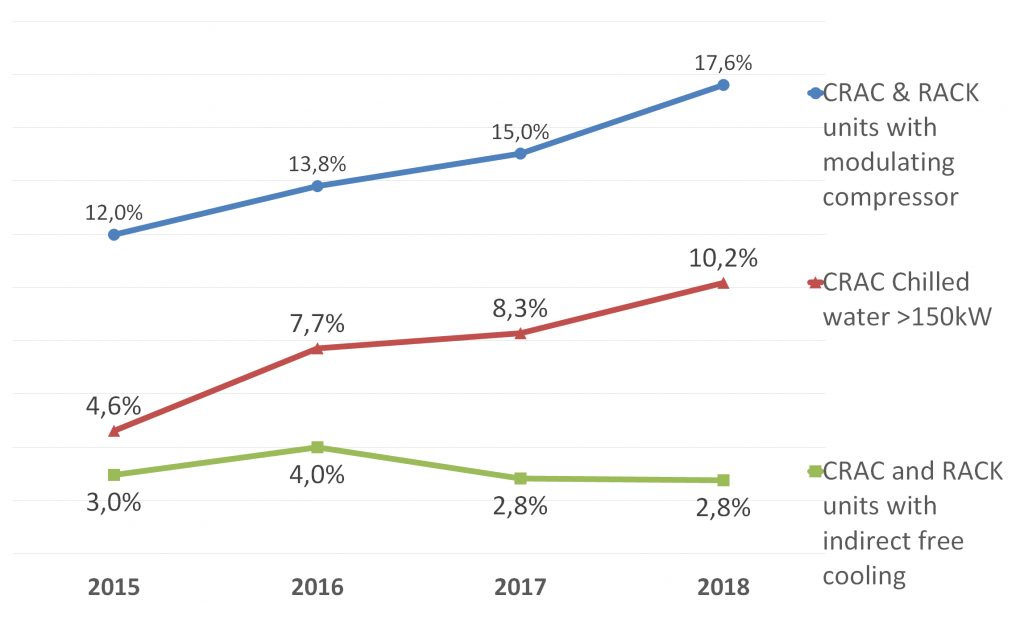 In the room air conditioner market, we noted two distinct trends: the first is, for chillers, a constant increase in units with capacity over 150kW (their number has more than doubled since 2015) and the second is, for direct expansion units, an upwards trend for modulating compressors. Paradoxically, since 2016 we have also seen a downwards trend for units with indirect integrated free cooling, which could be explained by competition from evaporative cooling in this sector.

The VRF market reached 216,135 units sold in Europe in 2018, representing an increase of around 7% in comparison to 2017. The principal markets in Europe are, in order of size, Turkey (despite the decrease recorded this year), France, Italy and Spain, totalling 108,744 units. Northern Europe still lags far behind with only 1,327 units sold in 2018. The largest increases were in Portugal and Romania, with an increase of more than 30%, whereas the largest decreases were in Norway and Lithuania, with declines of around -30%. 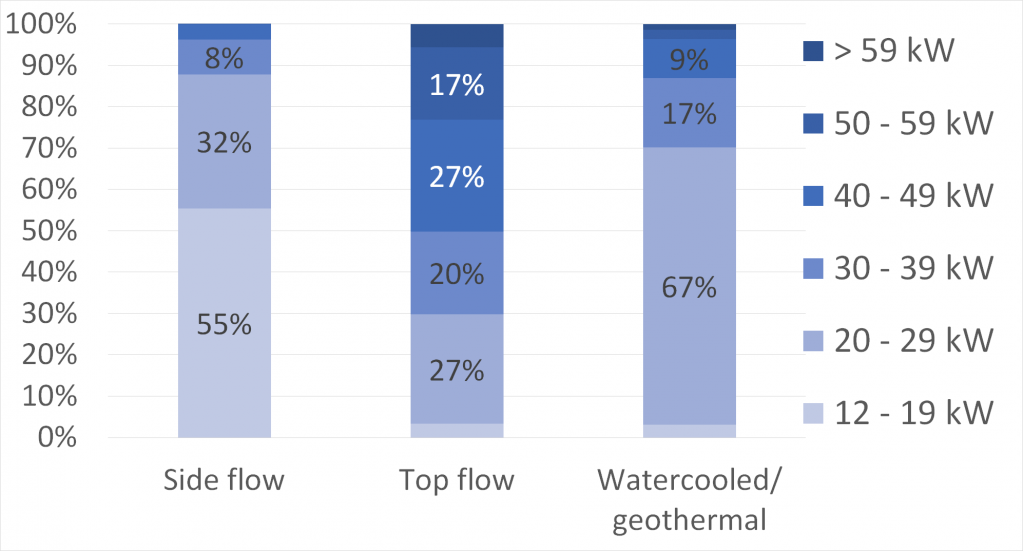 In terms of the market segmentation, we saw an increase in high-capacity VRFs with units with a capacity of more than 50kW rising from 11.2% in 2017 to 14.1% in 2018. This trend went together with a predominance of top flow units, which comprised around 60% of the units sold. As for interior units, the market remains oriented towards cassette units (42%), then duct units (30%) and wall units (21%), even though significant variations exist across countries.

The market reached 408.8 million euros in 2018 in the European Union, to which an additional 43.3 million euros should be added for Norway and 8.68 million euros for Switzerland. Of the units sold in Europe, 29% had a flow rate of less than 100 m3/h and 38% had a flow rate of more than 250 m3/h. In terms of energy class, most were Class A, accounting for 82% of units sold. Class A+ still only represents 5% of the market. In terms of the type of heat recovery, very specific types are popular in certain countries, such as in Germany with more than half of the exchangers are ceramic (for small decentralised units with alternating flow), Norway with 93% of the exchangers are rotary (in severe cold, the rotary movement prevents frost from forming, which would negatively impact energy performance) and France with 88% of units are equipped with counterflow heat exchangers.

The fan coil market was relatively stagnant in Europe between 2017 and 2018, levelling off at about 1.35 million units. This is due partly to the sharp decline in Turkey (-24.9%) and, to a lesser extent, the decrease in Russia (-7.1%). By contrast, the EU experienced an increase of +4.6%, mainly explained by large increases in Spain and the United Kingdom (+6.5% and +13.1% respectively) and by a stable Italian market (+2.4%). It is also worth noting that Portugal is the European country that experienced the largest increase between 2017 and 2018, with an increase of more than 40%, which allowed this country to reach 15,900 units in 2018.

The most dynamic types of fan coils were ‘cassette’ and ‘wall’ models, as well as ‘4 pipe’ units. Their large increase has, however, not inverted the market distribution, which remains, for the most part, dominated by ‘2 pipe’ units (73% of models). From a design point of view, fan coils with and without casing still represent 30% of the market respectively and ‘cassette’ and “ducted” models share the remaining market. 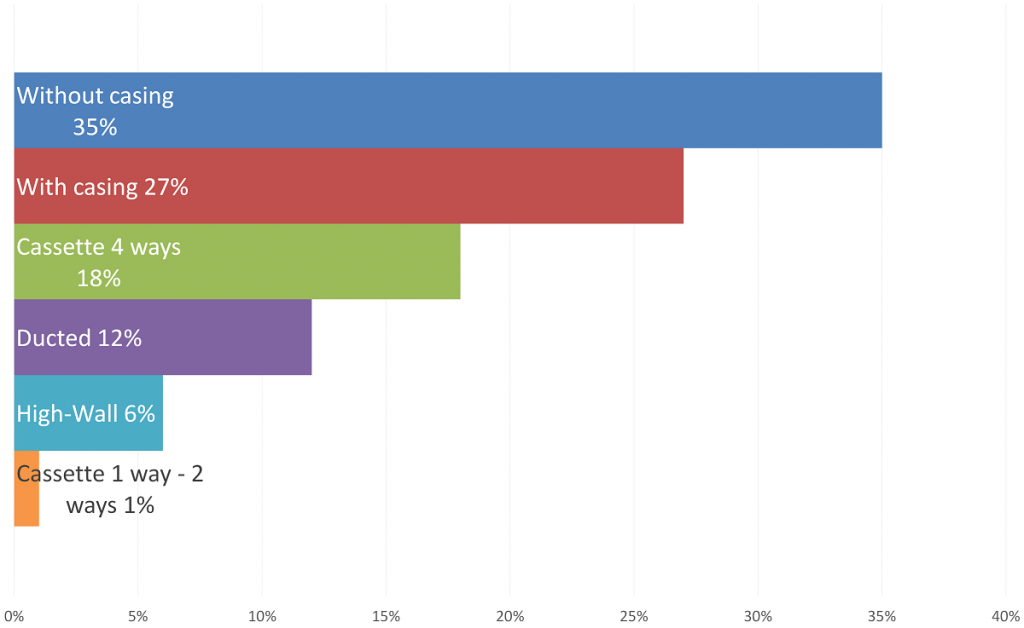 Medium capacity units, between 17 and 120kW, represent three-quarters of sales in Europe. Reversible rooftop units remain the preferred type in Europe, with about 70% of the market. Cooling-only units also seem to have gained ground, accounting for almost 17% of sales.

Rooftops market in 2018 by type of technology in Europe, Africa and Levant 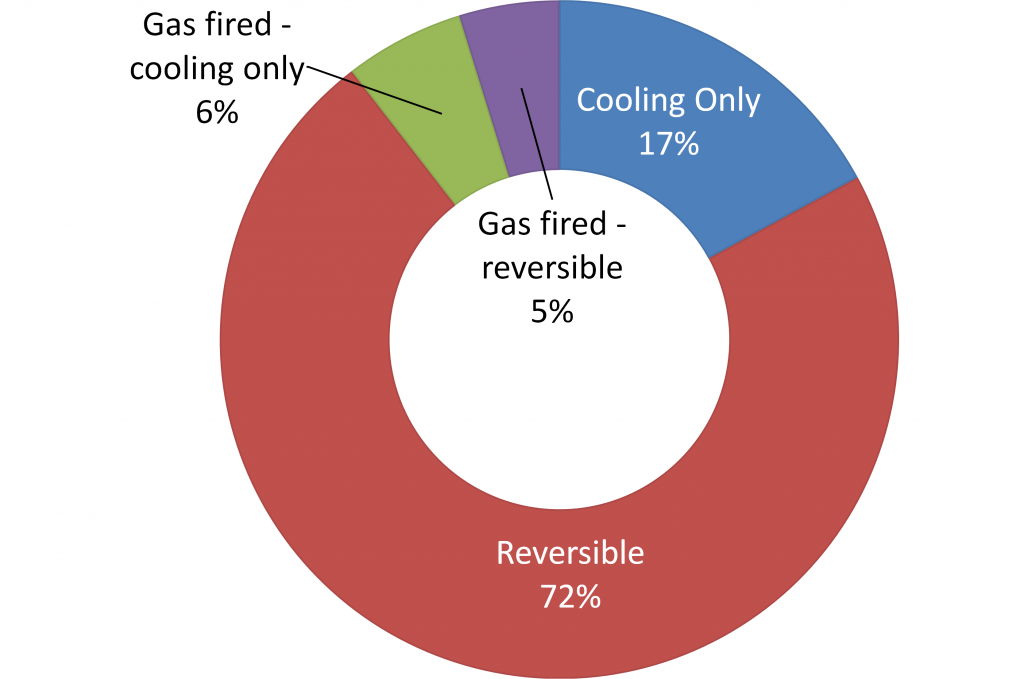 On the application side, the European market is dominated by new units, representing 62% of sales, with the remaining 38% being replacements. Furthermore, we have noted the use of air handling units predominantly in offices (21.4%) and in the commercial sector (15.1%).

It is also worth noting that air handling units with integrated controls represent two-thirds of sales in Europe and ‘compact’ units seem to have gained ground, as they constitute almost 60% of sales today.

The European market continued to grow in 2018, reaching around 940 million euros, of which about 3% were adiabatic. This increase has been driven by the main European markets: Germany, Italy, France and Spain, which recorded growths of around +10%.

The heat exchangers market is dominated by commercial refrigeration (39%), followed by industrial and comfort applications, with 26% and 21% of the market respectively. It is worth noting that the trend is significantly in favour for new heat exchangers (63%) to that of replacement (37%).

Heat Exchangers market in 2018 by type of technology - total EMEA 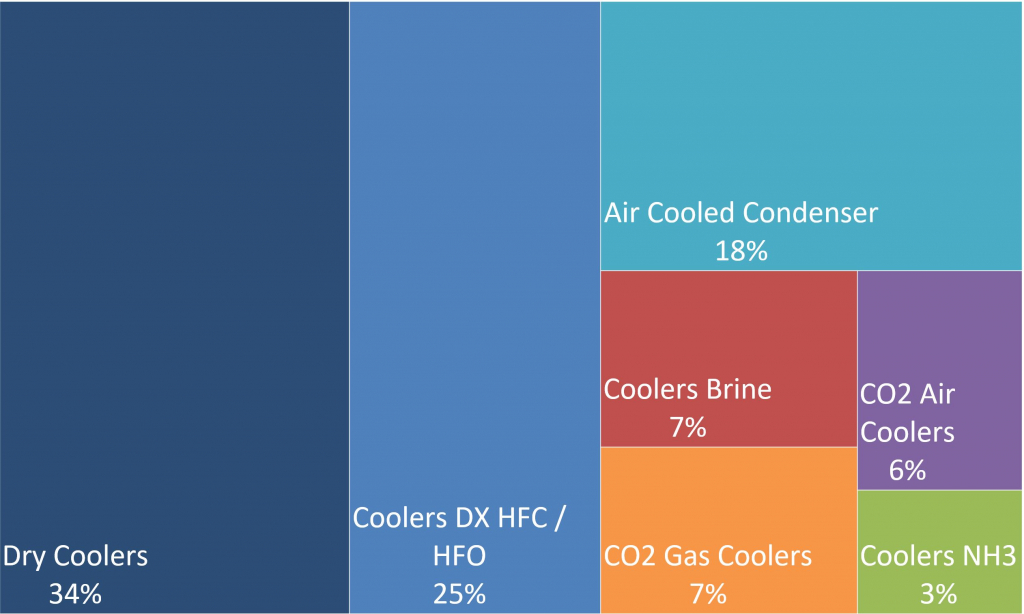 The chilled beams market has once again decreased – by 6% this year – falling to 54.4 million euros in 2018. This decrease was spurred by the countries that traditionally represented the bulk of the market, such as Sweden, the United Kingdom and France. These countries, with a market share of 51% in the EU, saw declines of -5% for Sweden and -30% for the United Kingdom, as a result of Brexit. Other regions, like Italy, Belgium and the Baltic countries also recorded negative movements. Conversely, Denmark, Spain and, outside of the EU, Switzerland and Russia have also benefited from increases of more than 40%.

Active chilled beams, which constitute 93% of sales, remain the most used in Europe. Among these, 76% are integrated and 24% are autonomous.

The growth in air filters in the EMEA market subsided in 2018, with total sales of around 950 million euros. The two biggest countries, Germany and France, who jointly represent 40% of the market, recorded a slight decrease of around -2%, whereas the United Kingdom and Italy increased by 4%. 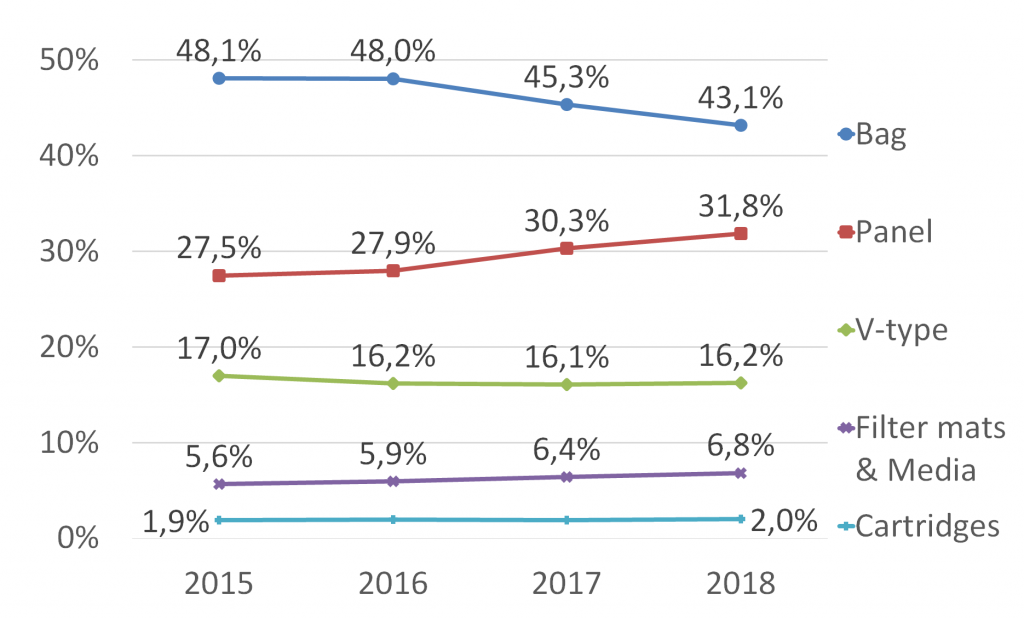 The European cooling towers market grew by 16% in 2018 to reach 131.3 million euros. Five countries represent two-thirds of the European market: Germany, Italy, France, the United Kingdom and Poland. All of these countries have seen an increase in their sales, the highest being recorded in Poland where the growth reached 25%.

Open cooling towers were the most popular in most European countries. Only the Baltic countries, Belgium, France and Romania preferred closed circuit towers.

As in previous years, more than 60% of the European market constituted low capacity units, those with fewer than 10 cells. Large capacity towers, with more than 50 cells, are used occasionally in projects in Europe, whereas they are more common in other geographical zones, like the Arabian Peninsula.

The air curtain market experienced an increase of 6% in 2018 and reached 83,000 units sold. Air curtains are mainly widespread in Northern Europe, where there are around 1,900 inhabitants per unit sold. In other European countries however, there are around 5,000 inhabitants or more per unit sold. Outside of the European Union, Russia and other CIS countries (the Commonwealth of Independent States) constitute one of the most significant markets with sales exceeding 230,000 units in 2018, due to stricter regulations.

In the European Union, 91% of air curtains were sold in the design, commercial and retail markets, whereas only 9% were destined for industry and cold rooms.

Electrically heated air curtains are the most popular in the European Union and represent almost half of the market. Air curtains with water heating constitute around 28%, whereas 20% do not provide heat. Units with refrigerant remain less popular for the moment and have a market share of around only 2%.

Air curtains market in EU28 by type of heating in 2018 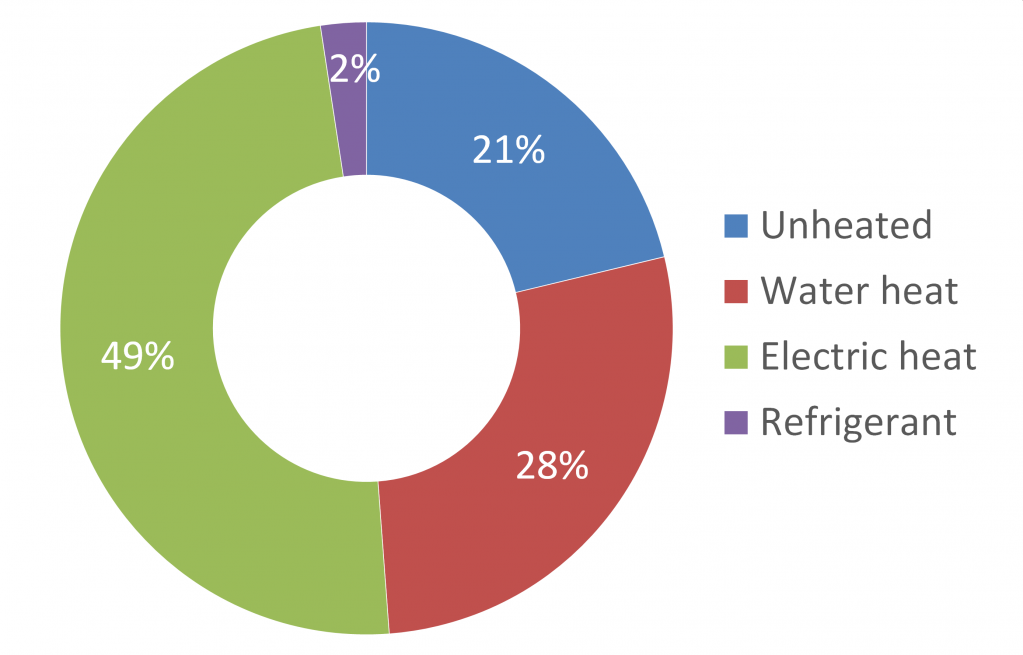 The single-flow pool dehumidifiers market declined by 15% in 2018 in the EMEA zone, representing a little more than 7,100 units sold. This decline, observed in all the regions of the EMEA zone, was particularly pronounced in Italy, Spain, Portugal and Turkey. France and Germany still constitute the principal single-flow markets with almost 40% of sales.

In contrast, the double-flow market saw its sales increase by 20% and reached more than 5,300 units sold. The increase is between 1 and 20% in all of the EMEA zone countries, with the exception of Northern Europe and the United Kingdom and Ireland region, where sales decreased by between 8 and 10%.