Opened in January 2018, Optus Stadium has become the third largest stadium in Australia with a capacity of 60,000 people. The stadium was built as part of Perth’s regeneration programme and replaces the iconic Subiaco Oval stadium, that was built in 1908 and played host to music icons such as AC/DC, Paul McCartney, U2 and Pearl Jam before the stadium was retired in 2017. 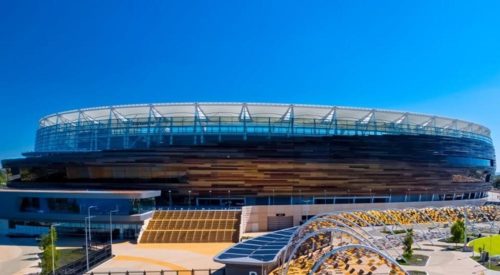 Based in the eastern suburb of Burswood, Optus Stadium is the new home of Australian Football League teams the Fremantle Dockers and the West Coast Eagles. However, the stadium is multi-purpose as it is also suitable for Australian rules football, cricket, soccer and rugby. Whilst the stadium’s prime use is for sporting events, it will also provide an additional venue for conferences and music concerts.

Initially, the new stadium was proposed for building on the grounds of the old Subiaco Oval stadium but the location was then moved to the suburbs. This meant the venue was unconstrained by surrounding developments, integrated well with the expansion of Perth’s public transport system and gave easier access to the Central Business District.

The round stadium consists of levelled tiered seating located above bars and restaurants. Due to a limited space allocation for the seating area, the unique design by Hassell Architects called for a slim insulation board profile that offered excellent thermal performance and high levels of energy efficiency.

The Kingspan technical team, along with the project’s contractors at Cubic Group, designed a customised installation solution that was applied to the underside of the seating plats using Kingspan’s Kooltherm® K10 Soffit Board.

Speaking about the project, Killian Smith, Kingspan Technical Services Manager explained that "We wanted to design an alternate installation system that would be aesthetically pleasing and would not detract from the beauty of the design, but also retained the thermal performance requirements of the project."

The insulation boards were chosen for their fast installation and their ability to meet the insurance requirements needed for this high-profile project.

Kingspan KoolDuct was also used for the stadium’s HVAC system. The versatile KoolDuct product lines the ice troughs in the facility’s bars and restaurants.

"Through high quality products and design, Optus Stadium has given the city of Perth a truly world class venue. The impressive stadium and surrounding facilities are open year round to the community in Perth and we are proud to be such a major part of it,” concluded the Kingspan Technical Services Manager.