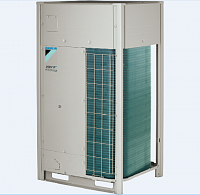 Daikin’s pioneering revolutionary VRV IV system set a new standard in the industry, introducing new levels of seasonal efficiency and comfort. Offering an integrated solution to cover multiple applications, its design simplicity, flexible configuration, combined with ease of installation and commissioning, continues to position Daikin as the best partner of choice for climate control, with over 220,000 VRV IV units sold since its launch.
Advancedresearch and development have ensured Daikin’s VRVIV technology remains unmatched. Features such Variable Refrigerant Temperature (VRT) Technology,which automatically adjusts temperatures in line with loads and ambient temperature, while the continuousheating during defrost technologyeliminates temperature drops during defrosting. Further system developments swiftly followed, such as the introduction of ranges including heat pump, heat recovery, cold climate and water-cooled models.With thelaunch of the new VRV IV+ series, Daikin has once again raised the bar.  At the heart of the latest system, the compressor has been completely redesignedapplying the latest technologies.

With the launch of the VRV IV+ series company continue to build on strategy of delivering systems that are truly efficient in real life situations and already compliant with the new ENER LOT21 – Tier 2 due to come into force in 2021.
Central to the new VRVIV+ units,the compressor has been redesigned and fully optimised to ensure high performance at part loads, which is the main operation mode throughout the year.
A key issue which can occur during low load operation,is refrigerant leaks from the high-pressure side to the low-pressure side in the compression chamber, resulting in loss of efficiency.This is due to lower pressure applied to the back side of the moveable scroll of the compressor.
This has been resolved in the new compressor bythe inclusion of a back-pressure control port that sends a small amount of high-pressure refrigerant from the compression chamber to the back of the scroll.This way we ensure optimal separation of lower- and higher-pressure sides within the compression chamber, boosting seasonal efficiency to a new standard.