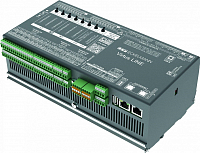 Apart from the Virtus 5 system control unit, refrigeration case controllers and a single pack controller, refrigeration companies will not need any other electronic control components for the reliable operation of CO2 integrated systems in the future.

Operation (display & configuration) is carried out via the Virtus 5 system control center or its modern web interface directly in the browser. Alternatively, the controller can be operated and supplied with firmware updates via the easily accessible USB service interface; this is particularly practical for on-site service and commissioning or in the event of network problems.

The interconnection control system features a fast Ethernet interface for communication with the system control center. The redundant connection via CAN bus and Ethernet increases the connection reliability. A further Ethernet interface enables the connection of future planned expansion stages of the control system - modular and freely scalable. With two independent CAN bus segments, the Virtus Pack Controller can be used very flexibly as a basic system in the future, even for CO2 plants with a very large number of refrigeration points.

The fans of the gas coolers, for example, can be conveniently connected digitally via two independent Modbus strands (RTU). The practical single-cable technology reduces the cabling effort to a minimum. The additional Modbus channel ensures high performance of Modbus communication and prevents conflicts between modules from different manufacturers.

Furthermore, the control system has a wide range of analog and digital inputs and outputs:

Engineering for the future of refrigeration

The new Eckelmann control system specializes in sub- and transcritical CO2 systems (R744). It is used in conjunction with the Virtus 5 and already supports the transition to digitalized refrigeration.
The newly developed software of the VPC incorporates numerous improvements to increase quality and maintainability, thus creating the basis for long-term future-proof solutions. Customers of Eckelmann benefit from this through an extremely flexible and easily expandable software architecture - because solutions that can be transformed and adapted are a key success factor in digitized refrigeration technology.

In the case of CO2 systems with technologies such as ejectors and parallel compression, users can continue to use the tried-and-tested VS 3015 CT pack controllers with SIOX extension modules, which is compatible with the current Virtus 5 system control center. Over the next few years, Eckelmann plans to gradually migrate to the next generation of the Virtus LINE, which will advance the digitalization of refrigeration with each new component as well as rolling updates featuring continuous improvements and functional enhancements.