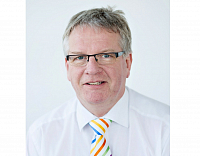 Kevin Glass, Managing Director of BITZER UK, is celebrating 35 years with the compressor specialist in a wide-ranging career than has spanned technical, management and, latterly, senior leadership roles.

Kevin recalls how he began his career in the industry: “When I started grammar school, it was my dream to join the RAF and train as a fighter pilot. However, I discovered that I have a colour vision deficiency, which meant this was no longer possible.

“I decided to do something with my hands, and applied for an apprenticeship with Taylor Woodrow as a Construction plant technician. This led to a position in a daughter company installing split system air conditioning units and repairing Trembath dehumidifiers.”

After a City & Guilds refrigeration course at Willesden College and experience in sales, Kevin joined APV Hall Commercial as an internal sales engineer for Bitzer and Fincoil products, “along with some very interesting ventilation units such as Punka louvres and Drum diffusers,” he recalls.

When the company became UK distributor for Bristol compressors, Kevin was given technical responsibility for the range, and soon after added Friga-Bohn and SWEP plate heat exchangers.

The company was purchased by BITZER and became BITZER UK Ltd in the early Nineties. Kevin was promoted to Engineering Manager in 1997. Over the next 10 years the business developed into pack building with the purchase of Jerome Engineering Vessels, and started manufacturing bespoke versions of BITZER condensing units.

“I was given responsibility for the design of systems along with introducing changes to the design and build methods used,” recalls Kevin. He was appointed Managing Director of Bitzer UK in 2011.

In terms of the wider industry, Kevin has contributed on several fronts, including serving as IOR president, and as a member of the IOR’s Board of Trustees and Membership Committee.

His contribution to the IOR’s Cool Talks Program includes with his highly-regarded – and indeed infamous – presentation, “Who Killed the Compressor?”

“During my career in the industry, I have seen a large number of significant changes impact our working lives. I am proud to be a part of an industry that keeps overcoming the obstacles presented to it, and continues to rise to challenges in a way that few other industries can match.”